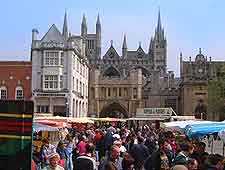 Shopping is one of the biggest reasons that people come to Peterborough and the city proudly markets itself as ranking amongst the best shopping destinations in East Anglia and beyond. There really are just so many shops spread around Peterborough, both in the city centre and at out-of-town retail parks, that the difficult part is choosing where to start.

Shops surround the Guildhall and this part of the city plays host to regular Farmers Markets, which take place here on the second and fourth Thursdays each month. For traditional shopping in Peterborough, the Westgate Arcade is the place to come and is home to boutiques, jewellers and accessory stores. 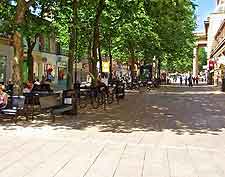 High-street stores are in good supply at the indoor Queensgate Shopping Centre, which covers an enormous area directly to the west of Peterborough Cathedral and is spread over two floors.

With just over 100 shops to choose from and more than 2,000 parking spaces, the Queensgate Shopping Centre has been trading since 1982 and contains department stores such as John Lewis and Marks and Spencer, as well as branches of BHS, Burton, the Disney Store, H&M, Monsoon, Next and River Island. 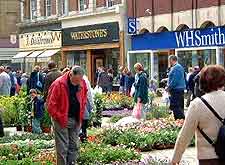 Further shopping centres in Peterborough include both the Rivergate complex and Serpentine Green. Located on the northern banks of the River Nene and next to Bridge Street and the Magistrates Court, the Rivergate Centre lies on the Viersen Platz and has an Asda supermarket, Comet, Iceland, Pets at Home, and Peacocks.

To the south of central Peterborough and in the Hampton Hargate suburb, the Serpentine Green Shopping Centre is best reached by either the Nene Parkway or the Frank Perkins Parkway, and is known for its enormous Tesco Extra hypermarket, food court, creche and 30+ shops.