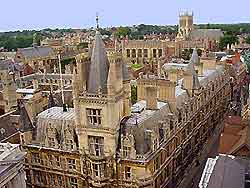 The unique university city of Cambridge has attracted students for almost 800 years and is a particularly scenic and serene English city. The River Cam runs through the centre of Cambridge and this is a popular place for traditional punting, one of the many tourism offerings that draw literally thousands of visitors to this part of Cambridgeshire each year.

Central Cambridge is rather dominated by the various university buildings and colleges, being easy to get around either on foot or by bicycle. The area known as the Backs lies alongside the River Cam and boasts splendid views of several beautiful college buildings, such as the King's College Chapel. Walking tours of the city are regularly organised by the Cambridge Tourist Information Centre on Wheeler Street. Led by local guides often dressed in Tudor costumes, these walks can be popular, and so tickets should be purchased in advance to secure your place. 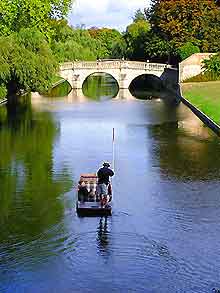 Cambridge University consists of no less than 31 individual colleges, each of which are independent, self-governing bodies, proud of their outstanding achievements. These include Christ's College, Churchill College, Clare College, Corpus Christi College, Darwin College, Jesus College, Magdalene College, Pembroke College, Queens' College and Trinity College. With a number of historic buildings, featuring wonderful historic architecture, many of the Cambridge University colleges have become major tourist attractions in their own right and often feature landscaped gardens, overlooking the riverside.

Other tourist attractions in the Cambridge area include Audley End House and Gardens - a stunning Jacobean mansion that was originally built for the admiral who commanded the British fleet against the Armada; Castle Hill - once one of the most important Norman defensive outlooks, with panoramic city views; Hemingford Grey Manor House - an impressive 12th-century stately home with extensive landscaped gardens; Hughes Hall - the oldest Cambridge University graduate college; Oliver Cromwell's House - the home of one of the most famous, historic people to live in the area; Peterhouse - founded in the late-13th century, with a number of historic college buildings; the Cambridge University Library - complete with an outstanding tower and a number of historic documents; Wimpole Hall Estate - the largest house in Cambridgeshire, containing formal Dutch gardens, large areas of parkland and woodland; Milton Country Park - with woodlands, fishing facilities and footpaths suitable for horse riding; Laundress Green - a true oasis in the heart of city life with many areas suitable for picnics; Midsummer Common - one of the most historic gardens here, dating back more than 800 years; and the Botanic Gardens - featuring more than 16 hectares / 40 acres of spectacular landscaped gardens. More information about Cambridge Tourist Attractions and Cambridge Landmarks. 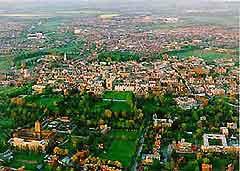 There are also a number of attractions close to Cambridge and these include Ely - home to the famous Ely Cathedral; Grantchester - a charming village full of thatched cottages and meadows of wild flowers; Newmarket - home of British flat racing; Saffron Walden - a beautiful medieval market town; and St. Ives - a lively Cambridgeshire town with many picturesque walking trails. Cambridge also has a number of excellent museums in the city centre, providing interesting information and much local history, with the most visited being the Museum of Archaeology and Anthropology, the Cromwell Museum, the Cambridge Museum of Technology, the Fitzwilliam Museum and Art Gallery and the Cambridge Imperial War Museum - home to a large collection of historic airplanes, including Concorde, Spitfires and more modern jet fighter planes. 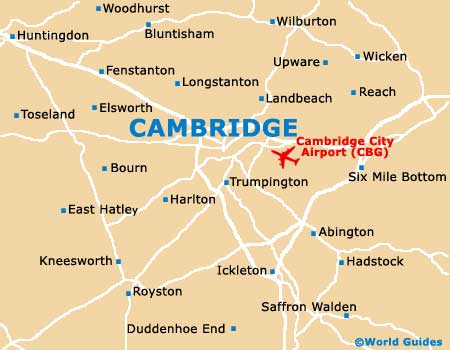