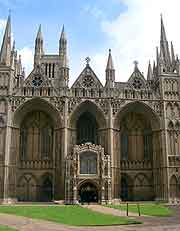 Peterborough started out as a Saxon village known as Medeshamstede. It was the site of a noteworthy monastery, although this was entirely destroyed by the Vikings in 870.

By 1000 AD, the settlement had grown into a modest-sized town, with its own Benedictine abbey and defensive wall. The town was known as Burh St. Peter, from which Peterborough is derived.

Despite surviving an attack by Hereward the Wake in 1069, the Abbey finally succumbed to a fire in 1116. From 1128, work on building a new abbey was begun, although it was not completed until 1258. Around this time in history, new streets and gates were also laid out. This medieval new town was built up to the west of the abbey's gates, outside the walls of the old burgh. In 1307, a town bridge was also built. 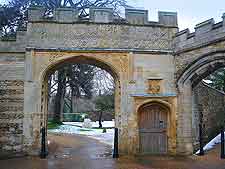 From Town to City

By the 16th century, Peterborough had officially been named a city. Nevertheless, it remained more akin to a small town, with much of its economy revolving around the local wool industry.

During the Reformation, Peterborough's abbey was closed. Two year's later, in 1541, it was re-established as Peterborough Cathedral. Some 46 years later, Mary, Queen of Scots was buried in the cathedral following her execution at nearby Fotheringhay Castle - her body was later moved to Westminster Abbey in London.

For many English towns, the 17th century was a time of upheaval, and Peterborough was no exception. During the English Civil War, Peterborough was somewhat divided, with some townsfolk supporting Cromwell's Roundheads and others in favour of King Charles I. Parliamentary forces prevailed, however, with Cromwell's troops occupying the city. During their stay, they ransacked the cathedral. 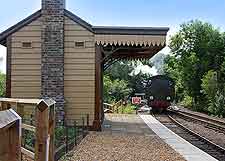 Even by the start of the 18th century, little development had taken place in Peterborough. In fact, it was still widely regarded as one of the smallest cities in Britain. It wasn't until the outbreak of the Napoleonic Wars, towards the end of the century, that prosperity and expansion finally came to Peterborough. In 1774, a theatre was built, followed by a Custom House in 1790. Many local roads were improved and a commission was set up to upgrade the city's streets.

It was the coming of the railway in 1847 that finally transformed Peterborough from small market town to industrial city. By 1880, piped water and sewers had been put in place, a public library had been built, and in 1900, Peterborough finally acquired its own electricity supply. It became one of the leading manufacturers of bricks in Britain, an accolade which endured for a large part of the 20th century.

In 1967, Peterborough was designated a New Town and new suburbs were built, along with many new public facilities.