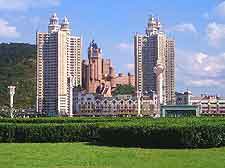 Whilst Dalian may not have the wealth of museums and art galleries found in Shanghai or Beijing, it does offer a decent account of itself through several institutions, which shed light on this region's unique heritage. Sites range from Dalian's comical and curious wax museum, to the cultural masterpiece of Lushun Hall.

In between are a few museums dedicated to the military struggles between Japan, Russia and China for control of the peninsula in the last 200 years. 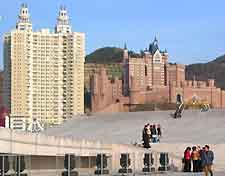 Tel: +86 411 8480 2938
The Xinghai Shell Museum is located within one of the most recognisable buildings on the city's shoreline and is actually housed in a rather grand looking castle. Expect to find literally thousands and thousands of all kinds of shells, some small, some enormous. This is even an interesting section devoted to squid, as well as an excellent souvenir shop, where you can purchase a wide range of shells.
Open hours: daily - 08:30 to 16:30
Admission: charge

Address: West Binhai Road, Dalian, 21, Liaoning, China, CN
Tel: +86 411 8466 6550
If you want to learn more about the archaeology and anthropology of this part of the world, this museum does a good job by Chinese standards. Prehistoric fossils from Yunnan and Chengjiang provinces are major centres of the exhibit, as well as the remnants of some of the world's earliest fruits and flowers. Fossils of the Chinese dragon bird, dinosaurs and even dinosaur eggs are amongst the other attractions here.
Open hours: daily - 08:00 to 17:00
Admission: charge

Address: 3 Hutan Street, Dalian, 21 116003, Liaoning, China, CN
Tel: +86 411 8268 4536
Anyone with an interest in wartime or naval history will want to pay a visit to this impressive naval centre. The highlight is a Soviet missile cruiser ship, which can be toured, and is one of Dalian's most popular tourist destinations. Long retired, the ship is now used for educational purposes. After touring the ship, visitors can check out the expansive gift store, which has become the city's largest shop for military toy models.
Open hours: daily - 08:30 to 17:00
Admission: charge

Tel: +86 411 790 5952
More than 100 waxwork figures are housed in China's largest wax museum, which resembles a classic European-style building. Celebrities on display include Western icons, such as Michael Jordan and Bill Clinton, as well as local heroes from Asia. The Dalian Waxwork Museum also recreates a number of famous scenes from entertainment classics, including both Shakespeare's Romeo and Juliet and Titanic.
Open hours: daily - hours vary
Admission: charge

Tel: +86 411 790 4980
If you have an interest in the realm of martial arts, then you should pay a visit to the largest martial arts hall on the planet. This four-floor building truly embodies a rare classic Chinese architectural style that is unique in Dalian, and offers an impressive weapons exhibition. Visitors can observe a traditional Wushu display of martial arts, and even learn some basic defence moves from the experts.
Open hours: daily - 08:30 to 16:30
Admission: charge