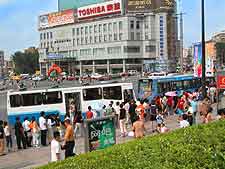 Dalian is brimming with top-end accommodation and glitzy hotels, which offer spacious guestrooms and superb facilities, such as the Furama and Hilton hotels. However, those looking for budget accommodation in Dalian will find a much smaller selection of options, since many of these buildings have been absorbed during the city's rather aggressive building boom and expansion plans.

Hotel rates in Dalian fluctuate greatly, mainly due to the city's accommodation being used by both business visitors and holiday makers. During the summer months, the city is at its busiest and hotel rates rise accordingly. Hotels in Dalian are also in demand during the city's many celebrations, including the springtime festivities of the Chinese New Year. 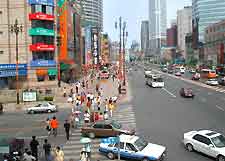 Downtown Dalian offers a good selection of conveniently located hotels, which are often close to Zhongshan Square, a colourful location that comes into its own as night-time falls.

The Swissotel Hotel lies in this part of Dalian and offers luxury accommodation close to the bustling shopping districts. Nearby, further hotels are also close to Friendship Square, which is known for its illuminations in the evenings. 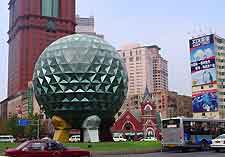 Amongst the cheapest accommodation on offer in the city, the Dalian Fàndiàn can be found along the Shanghai Lu and features inexpensive double rooms, being easy to spot with its red-brick architecture. Another popular option is the Foreign Experts Hotel, which is located on the southern side of central Dalian and within the actual campus of the University of Foreign Languages.

Further hotels in Dalian are located in the nearby hills and close to the coastline, with the accommodation in the Lushun district being especially popular and close to the beachfront. Accommodation in the Xigang area also suits those looking for surf and sand, with a number of hotels fronting the Fujianzhung Beach and offering appealing coastal views, which are especially breathtaking when you open the curtains in the morning.