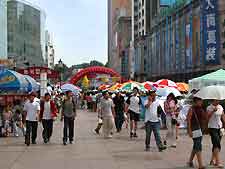 Eating with chopsticks is all part of the fun when dining out in Dalian. Once known for its seafood dishes and fairly limited repertoire of cuisine, the restaurants in Dalian have now embraced the demand for change and the city's dining scene has never been better.

Tourism has played an important part in this diversity and whilst many excellent Chinese restaurants can be found all over Dalian, if your palate is a little more limited, many of the largest hotels feature extensive international menus. This is also the case at a number of the city's most tourist friendly restaurants and dining venues, where menus may even be supplied in English.

You can expect to eat breakfast in Dalian at any time between 06:00 to 09:00, and whilst most tourists tend to favour eating this first meal of the day at the hotel, a number of eateries and stalls do open early around the city centre. Restaurants in Dalian don't hang around when it comes to lunch, opening as early as 11:00 and closing at approximately 14:00. Dinner too comes early, with most dining venues reopening at 17:00 and closing their doors between 21:00 to 22:00 or slightly later. 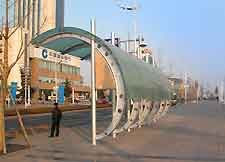 Located on the north-eastern side of China, the cuisine and dishes served at restaurants in Dalian are influenced by its location, with seafood dishes still forming a part of most menus. You can except more noodles than rice dishes, when compared to more southerly cities. Also extremely popular ingredients are wheat and millet, which are often used as a simple alternative to white rice. 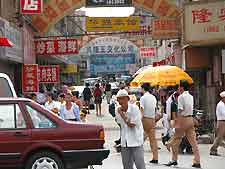 A great place for cheap eats in Dalian is around the Youhao Lu district, where tasty food at affordable prices is in plentiful supply. Many further restaurants can be found lining the numerous roads around Zhongshan Square, while the neighbourhood area around Friendship Square is a great place for eating out and contains a number of lively bars and coffee shops, which often stay open until fairly late.

The enormous food court at Dalian's New-Mart Shopping Mall is also worth considering. For self-catering, this bustling shopping mall also features a large supermarket, which stands on the lower level.

Amongst the best dining venues and eateries worth searching for in Dalian, the Mingzhu Revolving Restaurant stands out and is situated at the very top of the Bohai Grand Hotel. Slowly revolving as you eat, this stylish restaurant boasts some of the best views across the city's Zhongshan area, downtown district and harbour area. Other popular dining options in Dalian include Shanyi Curry on Baiyu Jie, Tian Tian Yú Gang on Xiangquian Jie, and the two Pizza King Italian Restaurants along both Renmin Lu and Youhao Lu, which offers excellent dining with some serious Italian food.