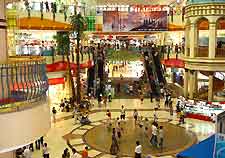 Dalian is home to a great shopping scene and can often be a highlight of a holiday here. Without doubt, the main shopping thoroughfare in Dalian is the Tianjin Jie, which contains many large stores and a fairly interesting mixture of smaller shops.

Particularly popular is the famous Friendship Shopping Centre, which can be found along Renmin Lu and off Zhongshan Square, and is brimming with top brand names and many popular lines. Close to Dalian's train station, a huge underground shopping centre is located directly beneath Victory Square and deserves a visit, while the 150+ shops at the Qingniwa Commercial City is also a great place to spend your money. 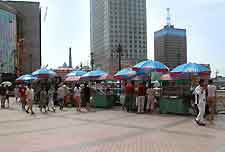 You can shop 'til your drop seven days a week, throughout the day in Dalian. The majority of shops around the city remain open Monday through Sunday from 10:00 to 22:00, although some do open slightly earlier and close earlier, at 21:00 or 20:00. More than 100 years old, the Min Yong Department Store along Cheng Yi Street is one of Dalian's most historic department stores and operates a slightly different set of opening hours - from 08:30 until 18:30.

The main shopping centres, malls, department stores and shops in Dalian are listed below.

Carrefour Supermarket - 665 Huang He Road, Sha He Kou, Dalian, Liaoning, 116021, China, CN
Tel: +86 0411 8465 3299
Suiting those looking to self-cater in Dalian, the Carrefour Supermarket is a well-known chain and is spread over two floors. Particularly busy at the weekend, this supermarket sells far more than just groceries.

Dalian Peace Commercial Plaza - 552 Zhongshan Road, Dalian, Liaoning, 116021, China, CN
Tel: +86 0411 8432 1818
Situated near to the Dalian Stadium and other prominent attractions, this plaza features plenty of places to both shop and eat, being situated in the Shanhekou district and in close proximity to the Kyshun area.

Tianhe Parkson Shopping Centre - 22 - 38 Xi'an Road, Shahekou, Dalian, Liaoning, 116001, China, CN
A modern indoor shopping centre with a large supermarket, plenty of eateries and clothing stores spread over four floors. Located in the city's Shahekou district, the Parkson Shopping Centre is close to a number of top attractions, hotels and others shops, such as the Carrefour Supermarket and also the Min Yong Department Store.