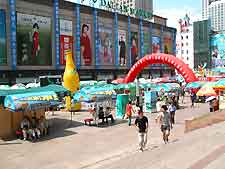 As one of China's main tourist destinations, Dalian does an impressive job of scheduling interesting, diverse festivals and cultural events throughout the year. Festivals unique to Dalian run alongside major countrywide celebrations, normally being enjoyed with much passion and zest.

Particularly popular things to do in the city include a visit to the Cherry Fiesta each April, when thousands descend on the valley in the Longwangtang area. Visitors celebrate the arrival of spring and witness the spectacular cherry blossoms flowering on mature trees planted back in the 1920s by a group of Japanese colonists.

Also of interest is the summer Beer Festival in July, while the Dalian International Marathon was first staged in 1987 and is now held every year in early October, starting and finishing at the Golden Pebble Beach.

The People's Republic of China features a total of nine national public holidays each year: