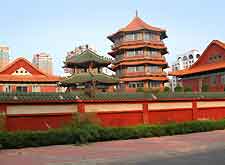 Due to the strategically important location of Dalian, both Japan and Russia took control of the city at various times in recent history. Their influence can still be seen today in a number of monuments and historic landmarks, which dominate some areas of the city.

Rather than being seen as a blight on the Chinese heritage of Dalian, this cultural diversity adds to the city's unique role as a centre of international trade and commerce.

Address: Anbo Town, Pulan Dian City, Dalian, 21 116211, Liaoning, China, CN
Tel: +86 411 920 0031
If you are feely hot and sweaty after sightseeing, then head for the An Bo Hot Springs, where the natural thermal waters are guaranteed to help you recuperate. Located 150 km / 93 miles north of the city, the springs are worth the drive for their relaxing warm waters, which can reach up to 73°C / 163°F. The therapeutic properties of the waters include sodium, sulphur, carbonate, silicate, nitrogen, oxygen, fluorine and radon.
Open hours: daily - 12:00 to midnight
Admission: charge

Tel: +86 411 8639 8277
At over 200 metres / 655 feet high, this mountain was the rear defence of Russia's army during the Russo-Japanese War. Erlingsan Gaodi was also the site of a pivotal battle in this conflict, where as many as 17,000 Japanese soldiers died taking the mountain. An exhibition room part the way up the hill exhibits a few relics from the battle, and at the very top you will find an imposing bullet-shaped monument, erected by the Japanese and regularly defaced by Russian visitors, suggesting that the conflict was never fully resolved. The views from the peak overlook the port and are very impressive.
Open hours: daily - 24 hours
Admission: charge

Address: Guang Lu Island, Chang Hai County, Dalian, 21 1160, Liaoning, China, CN
Tel: +86 411 868 5686
The name for this lake was taken from the fairy-shaped reflection caused by the surrounding hills on the water's surface when there is no wind. Visitors can come to look in the mirror-like waters of the petite lake to see for themselves. Located next to the coast, many people fish here for freshwater delicacies, such as silver carp, while seawater species can also be caught here, making this a particularly unique location for the sport.
Open hours: daily - 12:00 to midnight
Admission: charge

Address: Huijian Suo, Liaoning, China, CN
Tel: +86 411 8623 3509
The tiny village of Shuishi is where the Russian and Japanese commanders met to agree to Russia's surrender of Lushun in 1905. Huijian Suo, a small house, was the only structure still standing after the two sides bombed the village into dust, and now serves as a small landmark to the importance of this victory for control of the region.
Open hours: daily - 07:30 to 17:00
Admission: charge

Address: Xiangyang Road, Lushun, Dalian, 21 116041, Liaoning, China, CN
Tel: +86 411 8661 3411
The most sensitive and important naval base in northern China over the last 100 years, this local landmark is known as Port Arthur to many historians. The Russians were the first to truly fortify the Lushun area, but it was expanded by the Japanese after their victory over the Russians. Following WWII, it was returned to Dalian and the Chinese. Most of the area is considered a highly sensitive military zone akin to the DMZ in Korea. Excessive questions and photos are big 'no-nos', but the feeling of military tension here is no greater than in many other places, and makes for a unique experience.
Open hours: call for details
Admission: call for details

Address: Xiangyang Road, Lushun (Port Arthur), Dalian, 21 116041, Liaoning, China, CN
Tel: +86 411 8661 0676
Originally built by the Russians, this prison was later used and enlarged by the Japanese army. The site houses some 15 factories, four darkrooms and an enormous jail with more than 250 cages. Before liberation in the mid-20th century, hundreds of political dissidents were imprisoned here. Today, the prison is a reminder and memorial to this dark period in China's past. Visitors can tour the entire grounds at Dalian's Lushun Prison and get a sense of what those who opposed the government were subjected to during the 1940s.
Open hours: daily - 09:00 to 16:00
Admission: charge

Address: Renmin Square, Xigong, Dalian, 21 1160, Liaoning, China, CN
Originally known as Stalin's Square, in recognition of the Soviet 'liberation' of Northeast China, Renmin Square was given its more politically correct name in the mid-1990s. This massive plaza has four large grassy lawns with an eye-catching fountain in the middle. Locals come here to fly kites and do their uniquely Chinese morning workouts, making this one of the more pleasant sites in Dalian to sit and do some leisurely people-watching.
Open hours: daily - 24 hours
Admission: no charge

Address: Russian Street, Dalian, Liaoning, China, CN
Tel: +86 411 8254 0222
Every visit to Dalian should include a stop at this wonderful street, which brings 19th century Russia to life in the heart of this rich Chinese city. Take a horse-drawn carriage or wander on foot past dozens of duty-free outlets, antique stores and art galleries selling a range of art works. The dining scene is also top-notch, with several ethnic restaurants on-site from countries all around the globe. To keep you entertained while you stroll around, there are Russian street performers doing all kinds of engaging acts. It sounds improbable that a slice of Russia could exist in modern China, yet here it is.
Open hours: daily - 12:00 to midnight
Admission: no charge