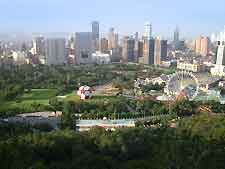 Dalian is made up of six distinct districts, each with its own geographical and economic character, but all sharing the same drive for development and prosperity. Some areas of Dalian are purely commercial in feel, but many of them blend beaches, forests and parks into their urban landscape.

The masterplan of creating a clean, friendly and accessible city has made Dalian one of China's most popular destinations and particularly visitor friendly.

Perched on the southern tip of Liaodong Peninsula, this district has fast become one of Dalian's most popular areas. With a number of ethnic minority villages and some popular outdoor recreation sites, Ganjingzi offers a well-rounded experience. Hikers can romp around the Jinlongso Forest Park and golfers can play on the acclaimed Xiali Golf Course in this part of the city. This is also the home of the plush Dalian Xijiao Resort, where visitors are able to relax in style.

The appealing and rather diverse Lushun district is Dalian's top outdoor recreation centre. With over 700 small islands spread along the shoreline, the local Golden Pebble Beach offers the easiest access to these isles. Various recreational activities are also readily available here and visitors often choose to hire boats or simply swim in the warm, inviting waters that surround this part of Dalian. Snake-lovers can visit the remote She Dao Island, where many thousands of these reptiles live, while those who enjoy the great outdoors can indulge themselves in the forested Baiyu Hill region.

Dalian's main economic centre also contains the greatest foreign influence of all the city's districts. In amusing contrast to the well-tailored businessmen strolling the streets, Jinzhou offers some excellent cultural sites, such as the Xiang Shui Temple and the Dalian Yingchengzi Folk Customs Museum. For a breath of fresh air, take a hike in the Daheishan Mountain Forestry Park, which is home to the area's highest peak. 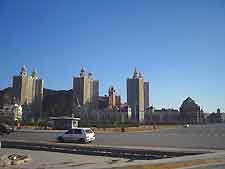 This district on Dalian's west side bustles with is an important residential area, boasting some of the best shopping and parks in the city. There are plenty of places to be eat and shop at the He Ping Commercial Plaza, and if you need a quiet moment amongst the trees, head over to Jinshi Yuan Park. Shanhekou is also home to the excellent Dalian Stone Collection Hall, which is considered one of the finest geological museums in the world.

Considered Dalian's crowning gem, the Xigang district's central location makes it the natural hub for many prominent businesses, resulting in an abundance of tourist-friendly areas. Renin Square and Olympic Square are popular plazas for lingering and people-watching, although it is the dining and entertainment options which set this district apart from others. Regional Chinese cuisine stands shoulder to shoulder with top international restaurants from around the globe.

Some of Dalian's most popular sights to see can be found in the Zhongshan district, which lies to the southeast of downtown. Amongst the top spots are Underwater World, the Naval Ships Exhibition Centre and China's biggest aquarium. Tiger Beach, perhaps Dalian's most popular stretch of sand, is also here, as are some of the city's most exclusive hotels. Zhongshan's proximity to the airport and the downtown shopping hubs make this the preferred area for lodging. Friendship Square and its famous globe is also in this part of the city.