Getting Around, Dalian Travel, Transport and Car Rental 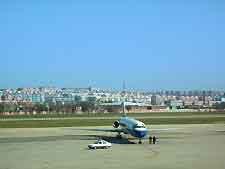 Thanks to its role as the most important shipping port in northern China and as a major tourist destination, Dalian is one of the easiest Chinese cities to reach. The local airport in Dalian handles dozens of direct flights every day, from destinations all over the country and abroad, and offers a range of ground transport.

Train travel and buses regularly ply the routes between Dalian and other major regional Chinese cities, and ferries frequently travel to and from both Japan and South Korea. So wherever you are coming from, you will find an easy means to get to this vibrant city. 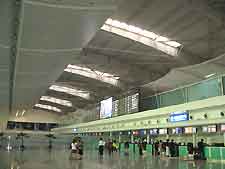 Taxis are available for transfers and travel into the heart of the city. Otherwise, other ground transport includes the airport shuttle bus, which departs for the city centre after each flight arrival. All transport options can be found outside of the Arrivals Hall. 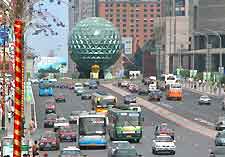 It is illegal for visitors on tourist visas to rent cars, and all drivers must possess a Chinese driver's license. This makes renting a car virtually out of the question for the majority of travellers. You can however hire a car with a Chinese driver. This transport not only accommodates the rules, but it also allows you to sit back and let someone else navigate the notoriously chaotic driving environment in China. Road signs are rarely in English, and when they are, they are usually mistranslated. So if you really want to get out on your own and travel around the countryside of Dalian, simply hire someone else to do the driving and sit back and enjoy the scenery. 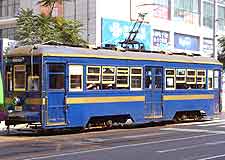 There are five long-distance bus stations in Dalian, testifying to the popularity of using coach travel as a means of travelling both to and from this city. Buses arrive in a near constant flow from major cities all around the country, so getting to Dalian by bus transport isn't a problem. Within the city, there are more than 150 bus routes covering the entire metropolis, making inner-city bus travel easy and convenient. Buses normally begin operating between 04:30 and 06:30, and finish between 20:00 and midnight.

There are also three nicely-restored trams, still serving as a main form of transport in the city. These throwbacks to the colonial periods are antique red trolleys, which travel throughout downtown Dalian and the south-western districts, and are well worth a ride. There are also three designated tourist buses that ply the standard routes, where the main attractions are located.

The central train station in Dalian can be found in the centre of town, opposite Victory Square. Trains travel between Beijing and other major Chinese cities at least twice a day. High-speed air-conditioned trains called 'Tourist Specials' run between Dalian and Beijing, Shenyang, Harbin and Changchun, making travel between these cities very convenient. Within the city there is a light rail system to help transport people to the northern side of Dalian, where the new Economic and Technology Development Zone is located. The 50-km / 31-mile railway network starts at the Dalian Central Train Station and runs through five different districts on its way to the northern edge of the city. The line even extends all the way to the scenic Golden Pebble Beach area, which is sited to the north of the city limits.

Dalian is not a very large city, but travelling by taxi is a great way to get between short distances. Rates are fixed by mileage, and taxi drivers in Dalian have a good reputation for being honest and friendly, even to foreigners. All taxis have an individual number and animal symbol fixed on the front window, should you need to identify your taxi. Flexible minibuses are another alternative to taxis and cruise the streets looking for fares. You can flag one down anywhere and although you may have to share the ride, this type of transport offers a cheap and easy way to travel around.