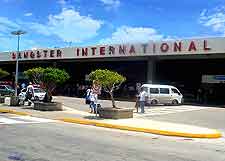 The Sir Donald Sangster International Airport is situated just 3 km / 2 miles from Jamaica's famous Montego Bay resort. It is set right next to the Doctor's Cave Beach and the Montego Bay Beach in the St. James region, where it is a totally modern Caribbean airport. This facility is the gateway to the Caribbean and ranks as the busiest of all Caribbean air transport hubs.

Originally named Montego Bay Airport, the facility was renamed in honour of a popular Jamaican prime minister. Its first tiny terminal was opened in 1959. Since then, upgrading has continued on a regular basis, with a new concourse, completed in 2005, now catering to large aircraft such as Boeing 747 and Airbus 340. The relocation of the duty free hall and the immigration section was completed in 2008. This complex comes with two terminals, one for international and one for domestic routes.

The majority of arrivals here are from the USA and Europe via full-service carriers such as Delta Air Lines, American Airlines, United, US Airways and Virgin Atlantic. A good number of smaller and low-cost airlines, as well as charter carriers such as Thomas Cook and Thomson Airways, are also represented. Together, these airlines provide flights to London, Manchester, Lisbon, Toronto, Montreal, Dusseldorf and Havana, as well as various domestic and regional flights around the Caribbean. The airport also serves as a major hub for Air Jamaica.

Address: Sunset Boulevard / The Queens Drive, Montego Bay, St. James, Jamaica, West Indies
Tel: +1 876 952 3124
Set on the north-western coast of the island, the Montego Bay Sangster International Airport is just a few minutes' drive from the city, the second-largest conurbation on the island. The city remains a major Jamaican tourist destination, being fronted by the ocean and backed by rolling hills.

The trip by road between the Montego Bay Sangster International Airport and the city's central district takes around 10 to 15 minutes along the A1 coast road, with its appealing ocean views. Those new to driving in Jamaica should take care, as local driving standards can make for interesting experiences.

Two airport-authorised taxi companies (JCAL and JUTA) operate from ranks just outside of the Arrivals areas, with cabs being booked at the desk adjacent to the Customs exit. Taxi cabs can also be booked in advance online via Montego Bay Airport's website, as can shared shuttle vehicle transfers.