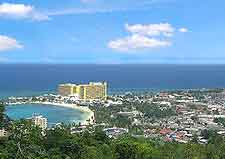 One of the most visited and most famous of all the beach resorts on Jamaica, Montego Bay is a bustling city with an interesting history. A notable holiday destination, especially at spring break time, Montego Bay is where you will find the island's principal airport and port, the latter of which is used by a seeming convoy of cruise liners.

The 'Hip Strip' of Gloucester Avenue is what many tourists come to Montego Bay to experience, with its abundance of beachfront hotels, fine eateries, lively bars and souvenir shops. Downtown is centred around Sam Sharpe Square and offers a more authentic experience, with its decaying Georgian architecture suggesting its clearly apparent former grandeur. For tourist information, it is Gloucester Avenue where the office of the Jamaica Tourist Board is to be found. 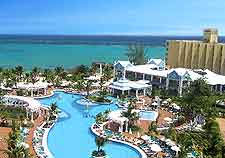 Cornwall Beach is one of the most popular around Montego Bay and although there is a small admission charge, its convenient location alongside many resort hotels, plentiful water sports and frequent parties all draw in the crowds of holiday makers. Closer to downtown Montego Bay and just a stroll away from Sam Sharpe Square is Walter Fletcher Beach, where snorkelling, changing rooms and other amenities are all to hand. Lying alongside Cornwall Beach is the Doctor's Cave Beach, while other possible choices include the beaches of Chatham, Dead-End and Rose Hall, and further north, the Tropical Beach resides next to Whitehouse Village and the Donald Sangster Airport. More information about Montego Bay Beaches. 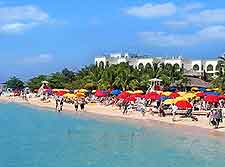 Apart from the beaches and related water sports of Montego Bay, there are some very appealing tourist attractions to hand, if you can bear to drag yourself away from the soft sand and endless Jamaican sunshine. The choice is quite diverse and includes the family friendly AquaSol Theme Park on Walter Fletcher Beach, where glass-bottom boat cruises, jet skiing and banana boats are just some of the fun activities on offer. At the Montego Bay Marine Park, the local eco-system is enjoying much needed protection and is best explored by guided canoe trips. At the Rocklands Bird Sanctuary, the finger-tame hummingbirds are quite special. while the tree-top Zipline Canopy Tours offer more of an adrenaline rush. A taste of bygone days is provided at both the Belvedere Estate and the Greenwood Great House. More information about Montego Bay Tourist Attractions. 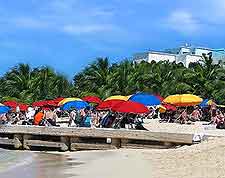 A number of the most well-known of the city's landmarks tend to be based within the vicinity of Sam Sharpe Square and are often of an anti-slavery theme. This part of the city is where you can admire the ruins of the Courthouse, the Civic Centre, and the Cage structure, where runaway slaves were often imprisoned overnight, along with drunk and disorderly sailors. Located on Market Street, Burchell Memorial Church is best known as being the church where famous educated former slave Sam Sharpe once preached as a deacon, before later leading the infamous slave rebellion. More information about Montego Bay Landmarks and Monuments. 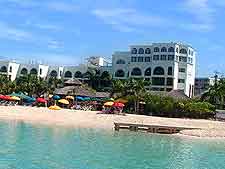 The heritage of not only Jamaica, but the Caribbean as a whole, is explored at some of the museums around Montego Bay. At the nearby Blue Hole Museum, formerly a large sugarcane plantation, there are exhibits relating to its past life, along with a zoo attraction and the authentic reconstruction of an Arawak village. The centrally located Montego Bay Museum remembers the days of agriculture and the growth of tourism, with information about the parish of St. James, the Arawak days and the end of slavery. The late 18th-century Rose Hall Great House is another museum of sorts and guided tours will tell the story of the murders that once happened here, many years ago. Also worth penciling in is a visit to the Bellfield Great House and the popular Gallery of West Indian Art. More information about Montego Bay Museums and Montego Bay Art Galleries. 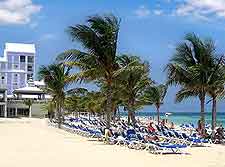 For those tourists who have sensibly chosen to hire a car for the duration of their holiday, the island of Jamaica will seem all the more easy to explore. Day trips from Montego Bay will reveal various wonderful coastal treasures and beaches, such as Discovery Bay, where Christopher Columbus once landed. In the parish of Trelawny, the town of Falmouth is roughly a 40-minute drive away and was once a busy port town, being today home to attractions such as the Albert George Shopping and Historical Centre, Water Square, Tharp House and the Central Wharf. Right next to Falmouth is the Luminous Lagoon, which glows at night and is quite an unusual sight. Further afield from Montego Bay is Nine Miles - a site for Bob Marley pilgrims, and Croydon in the Mountains, which lies within the interior of Jamaica and provides an insight into the world of an old island plantation. More information about Montego Bay Attractions Nearby. 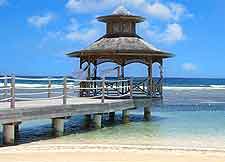