Montego Bay Weather, When to Go and Climate Information 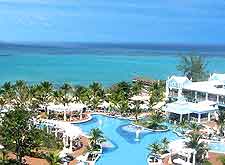 Jamaica has long been a major holiday destination, since its climate remains warm and inviting throughout the year. Although temperatures in Montego Bay are known to fluctuate slightly month by month, on the whole the weather remains hot and sunny for much of the year, with daytime annual averages rarely straying far from 30°C / 86°F.

The climate of Montego Bay is frequently described as being 'tropical maritime' and typically 'Caribbean'. Rainy weather is fairly predictable and rarely spoils the day. The rainy season of Montego Bay begins in May or June, with precipitation levels usually dropping in July and then rising again, between August until November, or even later. However, don't be alarmed by the promise of rain, local Jamaicans will proudly inform you that most showers are brief and sunshine usually arrives soon after. An entire day with an overcast sky is not commonplace here. 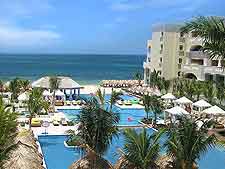 Although Jamaica is actually located within the Caribbean hurricane belt, the country only rarely experiences actual hurricanes, which come along as infrequently as one every ten years, or thereabouts.

When choosing what time of year you intend to travel to Montego Bay, as well as taking into account the seasonal climate trends and expected weather, do also consider the tourist seasons. Jamaica can become extremely busy between mid-December and mid-April, when hotels put their rates up and still become sold out. December, January and February are all especially pleasant months in Montego Bay, when the coastline sees the arrival of the cooling north-easterly trade winds. If you are prepared to arrive outside of the peak period, you can expect to enjoy considerable savings, along with very reasonable temperatures.