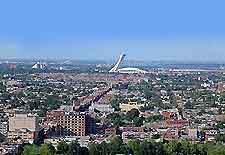 Montreal is an enormous metropolis and the second-biggest city in the whole of Canada. Standing in the province of Quebec (QC), Montreal offers a distinct English / French flavor and is very much a mixture of old and new, with the Montreal skyline featuring many stunning glass skyscrapers.

Much of Montreal was redeveloped in the latter part of the 20th century, for the 1967 World Fair / Expo, and more recently Montreal's 1976 Olympic Games, when many major sporting venues were created.

Around two-thirds of Montreal's residents are French, with the remaining third being predominantly English and based around the heart of downtown Montreal. Known for its friendly atmosphere and ambiance, historical architecture and lavish churches, enormous shopping malls and top restaurants, one of Montreal's most surprising features is the 'Underground City', which is a vast network of tunnels, shops hotels, cinemas and businesses, protected from the cold winter weather extremes.

Hotels in the city of Montreal are in good supply and often conveniently located for exploration of the city. Ranging from historic accommodation in the appealing Old Montreal district, to modern high-rise hotels in the downtown district, many hotels are close to the Old Port, the 'Underground City' network, the World Trade Center, McGill University and the nearby Montreal Pierre Elliott Trudeau International Airport (YUL) (formerly the Dorval Airport). Further hotels can be found along Sainte Catherine Street, and also in Montreal's colorful Chinatown district. More information about Montreal Hotels. 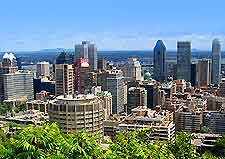 Montreal's tourism industry is well developed and many excellent tourist-related facilities are on offer here. The main tourist information centers in Montreal are Infotouriste Center close to the corner of Peel Street and St. Catherine Street, and the Old Montreal Tourist Center on North Dame Street, both of which offer a range of tourism advice, and information about local tourist attractions and the best places to visit. The city is divided into a number of notable districts, including downtown Montreal - close to Mount Royal Park; Old Montreal (Vieux Montreal) - a historic part of the city; Griffintown - close to the Old Port; the Latin Quarter - a lively bistro area around St. Denis Street, and Montreal's Little Italy - with many restaurants along St. Laurent Boulevard.

The city's main tourist attractions include popular Montreal Harbor Cruises - offering a variety of daytime and evening cruises along the scenic St. Lawrence River; Olympic Park - part of Montreal's famous Olympic Village, built for the Montreal Olympic Games in 1976, including the breathtaking stadium, with a capacity of around 80,000 spectators; Montreal's Biodome - home to four separate ecosystems and approximately 4,000 animals, situated inside the former Velodrome cycling stadium; and the Biosphere - an imposing and famous structure in Montreal, which has long been the largest geodesic dome on the planet, housing many areas of discovery and lively exhibitions, not to be confused with Montreal's Biodome. 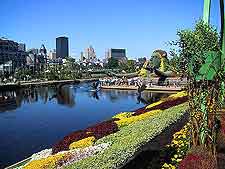 Other notable tourist attractions in Montreal include La Ronde - a popular amusement park, with many fast rides, roller coasters and an enormous Ferris Wheel, part of the Six Flags group; Montreal's Insectarium - featuring an array of popular creepy crawlies, including spiders, scorpions and a large Butterfly House; Dow Planetarium - perfect for stargazers and families, with regular shows projecting information about the solar system and planets; Bell Center - a modern sports stadium hosting many of Montreal's largest events, festivals and concerts, together with regular hockey matches; Christ Church Cathedral - a magnificent Anglican building, built in the mid-19th century, known for its neo-Gothic architecture; and Montreal City Hall - a notable landmark dating back to the 1870s, standing in the Old Montreal district. Popular park and gardens in the area include the Montreal Botanical Gardens (Jardin Botanique), Carré St. Louis, Champ de Mars, Mount Royal Park, Parc Lafontaine, Parc Maisonneuve, and the Parc de la Cité du Havre, a number of which feature ice skating and cross-country skiing in the winter months.

The main museums and art galleries in Montreal include Montreal Museum of Fine Arts - one of the city's best art galleries, housing over 25,000 items, with many impressive paintings, prints and seasonal exhibits; the Modern Art Museum - found in Montreal's Latin Quarter, offering an impressive collection of contemporary art works since the 1940s; Canadian Center for Architecture (CCA) - home to many appealing exhibits, including an impressive sculpture garden with views across southern Montreal; McCord Museum - founded almost 100 years ago and containing approximately one million items, with a range of information about Montreal's rich heritage; and the Bank of Montreal Museum - standing in a particularly historic building, with in-depth information about the bank and its early equipment. More information about Montreal Museums and Art Galleries.

Tourist attractions located nearby Montreal include Granby Zoo - just a short drive from Montreal, with more than 1,000 animals including all of the zoo favorites, together with daily shows and educational information; Mont Saint Sauveur - a wealthy resort close to Montreal, featuring excellent skiing during the winter months; Mont Saint Bruno - adjacent to Montreal's southern shore, with many seasonal recreational activities, such as a ski school, snow boarding park and hiking trails; Mont Sutton - a charming town with attractive scenery, a popular winter ski school and superb cross-country skiing; and Mont Tremblant - a small village within easy reach of Montreal, with 100 ski trails, a range of summer water sports and year-round appeal. More information about Montreal Attractions Nearby.