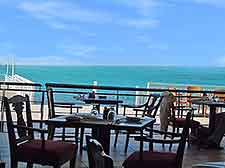 Montego Bay is one of the better places for dining out in Jamaica. It also has some of the most expensive restaurants. Even so, there's something to suit every taste and budget in Montego Bay, from street food to fine dining.

Jerk seasoning is a major ingredient in local dishes and is widely available in local eateries. For comfortable 'American' food, stick to the hotel restaurants. 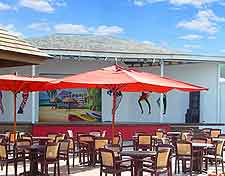 What to Eat and Where

Generally tourist tastes are best served in the tourist restaurants, but if you want to go local there are lots of Jamaican eateries, though the cuisine of the island is hardly world famous. Local cuisine in Montego Bay is available on the street and at beaches, but there are also plenty of tourist-oriented restaurants that serve North American and European fare. Fresh seafood finds its way onto dining menus across the city.

The best place to buy street food in Montego Bay is around the intersection of Kent Road and Gloucester Avenue. A stretch of beachfront property here known as the 'Hip Strip' is a stronghold of food stalls and locally-owned restaurants. There's definitely a broad tourist atmosphere in this area, but plenty of locals dine out here as well. 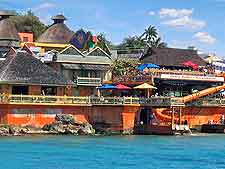 The cornerstone of Jamaican cooking is jerk seasoning, a concoction of spicy chillies and ginger. Jamaicans love jerk pork, but jerk chicken or fish are also on most menus. In every case, the meat is coated with spices and then barbecued over an open wood fire - usually on a plank of pimento wood.

Another mainstay of the Jamaican culinary experience is Red Stripe Beer, served in dining venues across Montego Bay. Many restaurants and bars around the city stage live music after hours. Reggae beats drum out of beach bars well into the evening. Other forms of Caribbean music as well as live jazz are also easy to come by.