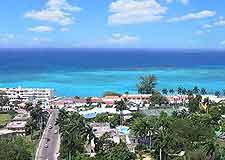 Located within the St. James Parish, where it is the capital city, Montego Bay lies on the north-western coast of Jamaica and is the country's second-biggest city, with a population of approximately 120,000 people. The city of Montego Bay not only enjoys a stunning coastal setting, but also a very scenic backdrop provided by a series of low mountains.

Gloucester Avenue serves as an important thoroughfare in Montego Bay and is lined with a good choice of hotels, eateries and bars. This vibrant road runs alongside the beachfront and is always filled with tourists. It is here that the Jamaica Tourist Board is situated, just across from Cornwall Beach. Open Monday to Friday, between 08:30 and 16:30, and on Saturdays from 09:00 until 13:00, this outlet is one of the best sources of city maps and guide brochures.

Downtown Montego Bay is very much centred around Sam Sharpe Square, which fans outwards to create a gridwork of streets. Many attractive Georgian buildings are spread around the downtown area, although a large proportion are in need of renovation work to restore them to their former glory.

The following list shows the main destinations on Jamaica and their respective times and distances from Montego Bay: 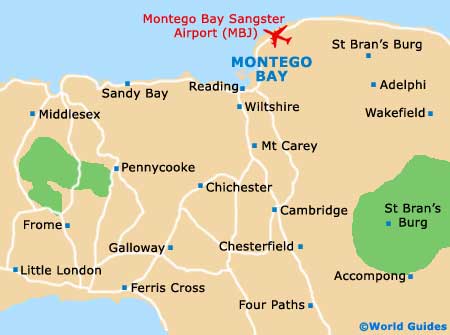