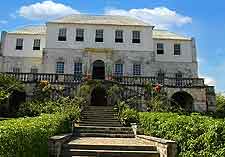 Museums in Montego Bay champion the work of artists and historical figures from not only Jamaica, but the entire Caribbean region.

A few of the great houses and plantation homes in Montego Bay have been converted into museums. In some cases, these are staffed by actors dressed in period costume, add a little authenticity and a fun-factor to the exhibits. 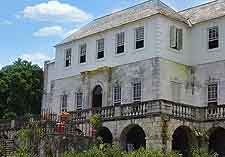 Address: Rose Hall Estate, Montego Bay, Jamaica, JM
Tel: +1 876 953 2323
This mansion was built in 1770, but didn't rise to prominence until the early 1800s. Legend has it that the house's owner, John Rose Palmer, unwittingly married a practitioner of black magic named Anne, whom locals called the 'White Witch'. According to the stories, she used her powers to get rid of Palmer and then went through two more husbands before she was found lifeless in the master bedroom. Rumours that her ghost haunts the Rose Hall Great House make tours all the more exciting. In recent years, Rose Hall has undergone much restoration and many original features remain. Guided tours explain its history and the life of Anne, who reputedly had many slave lovers and often murdered them here. Of note, the rather grand stone tomb of Annie Palmer is located within the grounds.
Open hours: daily - 09:00 to 18:00
Admission: charge

Address: Blue Hole Estate, Montego Bay, Jamaica, JM
Tel: +1 876 909 9002
This museum is located a few miles outside of the city and features a variety of onsite attractions. It was originally a sugarcane plantation, and the great house, sugar mill and boiling house are open for tours. The grounds of the Blue Hole also host a small zoo along with a reconstructed Arawak village.
Open hours: daily - 08:00 to 18:00
Admission: charge 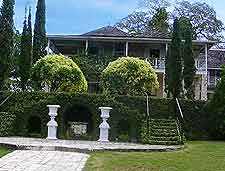 Address: Bellfield Estate, Montego Bay, St. James, Jamaica, JM
Tel: +1 876 952 2382
This restored mansion was built in the 1700s, and it's a classic example of the style of plantation houses built in the colonial era. The lawn behind the house is beautifully landscaped and has a 200-year old Guango tree onsite. The former plantation manager's residence is now a museum that tracks the colonial development of Montego Bay from the mid-17th century. Both the lawn and the restored sugar mill building are used for weddings and other events.
Open hours: Monday to Saturday - 09:00 to 17:00
Admission: charge, discounts for children

Address: Sam Sharpe Square, Montego Bay, Jamaica, JM
Tel: +1 876 971 9417
This museum is found on Sam Sharpe Square. Inside, the exhibits relay an overarching history of Jamaica and Montego Bay, with extra attention paid to the transition of the local economy from agriculture to tourism. This relatively new cultural attraction is housed within the Civic Centre and is especially popular with sightseeing tourists, being open every day except for Mondays.
Open hours: Tuesday to Friday - 09:00 to 17:00, Saturday - 10:00 to 15:00, Sunday - 12:00 to 17:00
Admission: charge