Getting Around, Cologne Travel, Transport and Car Rental 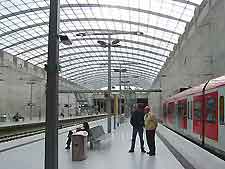 Getting to Cologne is made easy by the Cologne Bonn Airport, which is located just a short distance from the city and is an important local transport hub in its own right. Low-cost flights to major European cities are plentiful, but some international long-haul connections require a change at a larger hub first, before flying into the city.

The city of Cologne can also be conveniently reached using the excellent German rail travel network, or by taking an inexpensive bus. Once in the city, the efficient U-Bahn transport will whisk you around in no time. 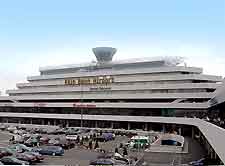 Address: Waldstrasse 247, 51147, Cologne, Germany
Tel: +49 220 3400
Cologne shares its international airport with the neighbouring city of Bonn. Located 15 km / 9 miles southeast of the city, the airport is equal distance from both of the cities it serves. Ranking as the country's sixth-largest air facility, the Cologne Bonn Airport stays open 24 hours.


Facilities at the airport include car parking, baggage storage, ATMs and banks, as well as dining and shopping outlets. Visitors can hire a car at the airport and self-drive to Cologne in less than 30 minutes, while other transportation options include taxi travel and rail connections to the Köln Trimbornstr, Köln Messe / Deutz, Köln Hauptbahnhof and Köln Hansaring stations. 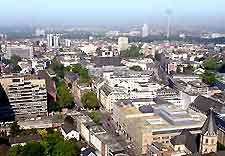 Car rental is available at the Cologne Bonn Airport through the following travel agencies - Sixt, Avis, Budget, Europcar and Hertz. Car hire transport desks at the airport are generally open from 07:00 until 23:00 and vehicles can be hired on-the-spot, although advance booking is recommended. Vehicles can also be hired in Cologne city centre through a local travel agency or your hotel.

Driving in Cologne is straightforward, with clear signage and easy access to several major autobahns. The city is fairly compact and therefore hiring a car is not usually necessary, unless you wish to explore the surrounding Rhineland.

As the city of Cologne has a subway and tram system, known as the U-Bahn, buses are not commonly used as a primary means of transport. However, there are some useful bus connections to other destinations within Germany, as well as some international connections.

The U-Bahn transport system consists of subway trains and trams, and is one of the easiest means to travel around the city. Some trains have ticket vending machines, but visitors are advised to purchase their tickets in advance of boarding at one of the stations.

Taxi transport is plentiful in Cologne and visitors will have no problem in finding taxis in central areas. They can be hailed in the street, caught from taxi ranks or ordered by telephone. There is a basic charge once you get in and then additional charges for each kilometre travelled. Fares are higher between 22:00 and 06:00, as well as on Sundays and public holidays. Many taxis in Cologne now accept credit cards, but it is best to check with the driver before you set off.