Cologne's landmarks, historical buildings and monuments are often overshadowed by the city's crowning glory - the Cologne Cathedral. While the cathedral is truly magnificent, as is its setting on the banks of the River Rhine, the city hides some other monumental gems.

Other impressive landmarks come in the form of centuries-old market places, a manor house that was formerly the site of a castle, and the most famous address in the world of perfumery - Glockengasse 4711. 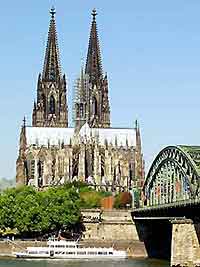 Address: Hauptbahnhof, Cologne, D-50667, Germany, DE
Tel: +49 0221 9258 4730
This is the city's primary landmark and a symbol of the importance of Cologne through the ages. The Gothic cathedral is a UNESCO World Heritage site and took more than 600 years to build, having been completed in 1880. Construction of the cathedral's richly decorated interior lasted many centuries, and fortunately was not devastated by the dozen-plus bombs that hit the cathedral in WWII. Visitors can climb one of the towers for stunning views across the city, but it does take some considerable effort to reach the top.
Open hours: daily - 06:00 to 19:30
Admission: charge

Address: Tipsgasse / Eisenmarkt, Cologne, D-50667, Germany, DE
Dating from 1935, this area was originally the city's Iron Market. Nowadays, visitors will find a recreation of the market, with ironmongers selling wares that have been made using traditional methods. Of particularly interest within the square is the Hänneschen Theatre, where puppetry performances are staged. A memorial to local actor Willy Millowitsch is also situated here.
Open hours: daily - 24 hours
Admission: no charge 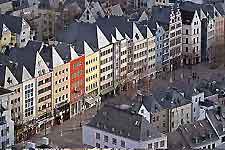 Address: Altermakt, Cologne, D-50667, Germany, DE
Formerly the hub of the city, the Old Market remains abuzz with activity even to this day, though it is primarily tourists and shoppers that come to soak up the atmosphere, with locals preferring quieter spots. Stop to admire the Town Hall and the many other old buildings and historic landmarks, which line the square as well as the Marktbrunnen fountain - the impressive centrepiece. In December, the Cologne Christmas Market is stationed here, and the square fills with manic shoppers looking for festive decorations, foods and gifts.
Open hours: daily - 24 hours
Admission: no charge

Address: Glockengasse 4711, Cologne, D-50667, Germany, DE
Tel: +49 0221 925 0450
Home to the world's first internationally acclaimed brand of perfume, Glockengasse 4711 is one of the most well-known addresses in the city of Cologne and an important local landmark. Kölnisch Wasser developed the original eau-de-cologne (Echt Kölnisch Wasser), which was then massively influenced by the French, who took the lead in perfume development. Housed in the original neo-Gothic house, the shop is still a perfumery where visitors can stop by to pick up a bottle of this iconic scent that helped to make the city so famous.
Open hours: daily
Admission: no charge

Address: Burgallee 2, Cologne, D-51127, Germany, DE
Situated in the south-eastern reaches of the city, this manor house was once the site of a 14th-century moated castle. Having undergone many transformations over the centuries, the building is currently used by the University of Cologne as the Theaterwissenschaftliche Sammlung. The castle was converted into a palace in the mid-18th century by the city's grafen (earls). The interior of the palace is ornately decorated with oil paintings, the most famous rooms being the Garden Hall and the Chinese Room.
Open hours: daily
Admission: charge