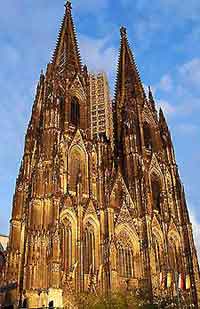 Cologne can trace its history back to 38 BC, when the first Roman troops arrived and set up camp here. By 50 BC, the Roman Emperor Claudius had awarded this town the right to be called the capital of a Roman province, which was known as Colonia Claudia Ara Agrippinensis.

During the 4th century AD, several Christian saints were martyred here, including St. Ursula. By 313 AD, the province even had its own bishop. In 785 AD, it became an archbishopric under Bruno I. As one of the electors of the Holy Roman Empire, the Archbishop of Cologne was a powerful person in his day.

In 1164, Archbishop Rainald von Dassel brought to Cologne what were said to be the relics of the Three Magi. Thus, he transformed the city into a place of holy pilgrimage.


The city also became an important trading centre during the Middle Ages. Wealthy merchants were responsible for building its impressive churches. In 1248, work began on building the Kolner Dom (Cologne Cathedral). However, this wasn't to be an entirely peaceful period in the city.

By the 13th century, relationships between Cologne and its archbishop had certainly become strained. The Battle of Worringen in 1288 led to the capture of Archbishop Siegfried of Westerburg and, as a result, Cologne achieved a brief period of complete freedom. By the 15th century, the city was still largely independent of its Christian leaders, who were forced to take up residence in nearby Bonn.

History in the Early Modern Period

In February 1784, Cologne suffered terribly during the worst floods to be recorded in its history. Huge ice blocks were forced down the flooded river, destroying ships and houses, and causing many deaths. Later, the French Napoleonic Wars ended with the city's occupation by the French. In fact, Cologne became part of the French Département de la Roer. It was to end in 1814 and, a year later, the city became part of Prussia.

During the late 19th and early 20th centuries, Cologne's boundaries were extended to include many of the surrounding villages and towns. By 1914, at the time of the outbreak of World War One, the city was home to some 600,000 people.

When the war ended, Cologne came under the control of the British Army of the Rhine, a situation that was to last until 1926. The post-war demilitarisation of this part of the Rhineland changed the face of the city. Two green areas were freed up, which were transformed into large public parks. In 1919, Cologne re-established a university in the city (it had been closed by the French over a hundred years earlier).

During World War Two, the city fared badly. It was the target of an unprecedented bombing campaign. On one night in May 1942, more than 45,000 people were left homeless, while the Cologne Cathedral was hit by over a dozen bombs. In 1945, US troops captured the city, meeting little in the way of resistance.

After the war ended, it took many years to rebuild the city. A plan created by architect Rudolf Schwarz in 1947 included the building of several new roads, as well as the reconstruction of many churches and other historic landmarks.

More recent urban developments include the Media Park, which comprises one of Cologne's more distinctive modern landmarks, the KolnTurm, a modern office tower completed in 2001 and measuring in at just under 150 metres / 492 feet in height.