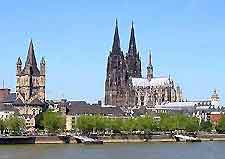 Known in Germany as Köln and lying particularly close to Bonn, the city of Cologne has long been the biggest city in the North Rhine-Westphalia region, and the fourth-biggest city in the whole of Germany. Despite its size, Cologne is a surprisingly beautiful city and has grown around the Rhine River, spoiling visitors with its endless sightseeing and magnificent buildings.

Cologne is one of the country's most historic cities, and many of the best sights are to be found close to its breathtaking Kölner Dom (cathedral), close to the main train station (Hauptbahnhof). Tourism in truly booming in Cologne and many tourists choose to purchase the invaluable Köln Welcome Card, which offers major savings for visitors and is available at the Cologne Tourist Information Centre, on the Unter Fettenhennen.

From sunny riverside beer gardens to historic buildings, tourist attractions within the city of Cologne are varied to say the least. Highlights include cruises along the River Rhine, the many animals and creatures within the Cologne Zoo and Aquarium (Zoo Köln), the vast selection of traditional ales at the Früh am Dom, the exotic plants and themed landscaping at the 19th-century Cologne Botanic Gardens, and the historic EL-DE Haus, once the headquarters of the Gestapo (German secret police). More information about Cologne Tourist Attractions.

Many historic landmarks are scattered around Cologne and offer bags of tourist appeal. In particular, look out for Cologne Cathedral - otherwise known as the Kolner Dom and now an acclaimed UNESCO World Heritage site; Old Market - the city's 'Alter Markt', bustling with tourists and locals alike; Iron Market (Eisenmarkt) - a public square offering many unusual gift ideas and local traders; Glockengasse 4711 - the actual origin of the world-famous 'eau-de-cologne' perfume; and Wahn Castle - the Schloss Wahn, a grand palace and part of the University of Cologne, with a highly decorated interior and a large collection of oil paintings. More information about Cologne Landmarks. 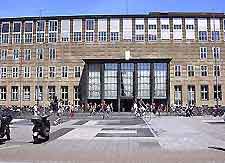 Cultural attractions within Cologne are in good supply and especially diverse. The main museums and galleries include the Chocolate Museum - known locally at the Schokoladenmuseum and home to a wealth of information about German chocolate making; Cologne's Roman Germanic Museum - with a large number of ancient Roman mosaics and relics; German Sport and Olympic Games Museum - celebrating German sport and documenting the evolution of the Olympic Games; the Cologne Museum of Applied Art - home to a great collection of art works, from the Middle Ages onwards; and the Holography Museum and New Visual Mediums - with over 1,000 different exhibits and many awesome holograms. More information about Cologne Museums and Cologne Art Galleries. 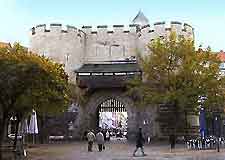 Those wishing to explore other areas of Germany will find plenty of tourist appeal within Cologne's many neighbouring cities and towns. Particularly popular and in close proximity to Cologne is the city of Bonn, where top restaurants, museums, galleries and historical buildings abound, making for a great day trip. Other excursions worth considering include the state capital of Dusseldorf and its appealing Altstadt quarter and riverfront attractions, the historic Schloss Morsbroich castle within nearby Leverkusen, and the family orientated Phantasialand theme park at Bruhl. More information about Cologne Attractions Nearby.