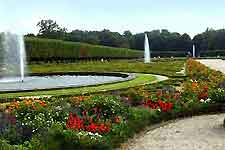 Cologne is blessed with many green spaces, including public parks and landscaped gardens. However, when the sun is shining during the long summers, Cologne is filled with beer gardens, where you can relax, enjoy the scenery, and more importantly, sip a glass of cool German Kölsch beer.

One of the most popular beer gardens in Cologne is the Aachener Weiher, which is set within a park and especially close to the university buildings, often becoming busy during peak periods. The city's premier parks and gardens are displayed here. 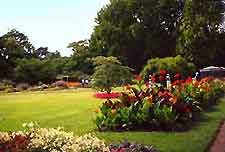 Address: Amsterdamer Strasse 34, Riehl, Cologne, D-50735, Germany, DE
With many important plant collections and covering more than 25 acres / 10 hectares, the Cologne Botanic Gardens date back to the middle of the 19th century. Brimming with enormous plant specimens and magnificent trees, other highlights include a number of glasshouses filled with exotic plants, ponds, fountains, colourful flower borders and a nearby cable car ride.
Open hours: daily - 08:00 to dusk
Admission: no charge

Address: Düsseldorfer Strasse, Teil des Carl-Duisberg-Parks, Leverkusen, Cologne, D-51061, Germany, DE
Boasting a true taste of the orient at its best, the Cologne Japanese Gardens are located on the city's outskirts and are well worth searching out. With endless traditional Japanese features, such as clipped trees, a teahouse, stone Buddhas and lanterns, ponds, and several brightly coloured bridges, the gardens are especially impressive in the spring, when the cherry trees burst into blossom, and again in the autumn, when the maple leaves quickly change to dramatic, fiery colours.
Open hours: daily - dawn to dusk
Admission: no charge 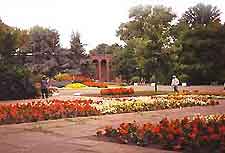 Address: Rheinparkweg, Deutz, Cologne, D-50679, Germany, DE
Laid out at the beginning of the 20th century, Rhine Park is named after the Rhine River, which meanders along one side of the park itself. Around the park you will be surprised to see a number of modern sculptures on display. The park's play area is sure to keep children amused, although the thermal baths may also be of interest if you are looking to unwind.
Open hours: daily - dawn to dusk
Admission: no charge 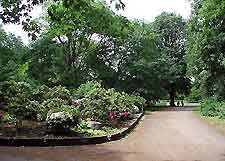 Address: Venloer Strasse 40, Belgisches Viertel, Cologne, D-50672, Germany, DE
A particularly historic park dating back almost 200 years, the Stadtgarten offers an important green space and is regularly used for an array of recreational activities. Cologne's Stadtgarten is particularly busy during the summer months, when various outdoor concerts and events take place, both during the daytime and in the evenings.
Open hours: daily - dawn to dusk
Admission: no charge

Address: Dürener Strasse, Lindenthal, Cologne, D-50931, Germany, DE
Cologne's Stadtwald, otherwise known as the City Forest, covers a vast area of over 150 acres / 61 hectares, and lies on the outskirts of the city. This important greenbelt is home to a number of appealing attractions, including a boating pond, wildlife reserve and summer beer gardens. Even on the sunniest of days you will not find it difficult to find shade under a large tree within the Stadtwald.
Open hours: daily - dawn to dusk
Admission: no charge

Address: Kreuznacher Strasse, Raderberg, Cologne, D-50968, Germany, DE
Always popular with locals in Cologne, the Vorgebirgs Park offers plenty of interest, whatever the time of year. Children particularly enjoy the playground, the open areas of grass and also the shallow pool, while for the adults the summer roses are extremely fragrant and attractive. Many people come here each morning for a quick jog around the park.
Open hours: daily - dawn to dusk
Admission: no charge