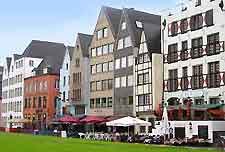 The truly cosmopolitan nature of Cologne is reflected with its unusually high concentration of restaurants and eateries in general. Most tastes are catered for when dining out in Cologne. However, for a real flavour of the city and a wide range Rhenish specialities, the many German restaurants have something to suit most palates and many even feature English-language menus.

Local brewpubs in Cologne are often as good as many of the best restaurants and a great place to find hearty German fare at its best, often being located next to shops, bars, clubs and the cathedral. 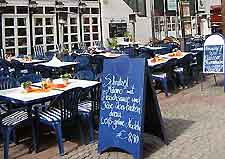 Traditional German fare is not difficult to find within Cologne. Many regional dishes are available and most hotel restaurants choose to start the day off with a simple breakfast (Frühstück), with bread rolls, toasts, jams, cheeses, and meat such as ham or salami. Alternatively, cereals are equally popular and are usually served with coffee.

In Cologne, lunch is an important part of the day and known locally as 'Mittagessen', and is generally eaten around midday. For Germans, the evening meal can vary greatly, with many choosing a light meal of sandwiches or a salad, while others favour a hot dinner, as do most visitors. Local specialities in the Cologne area include baked chunks of beef and horsemeat (rheinischer sauerbraten), potato fritters (reibekuchen), black pudding (blutwurst) and a number of mussel dishes. 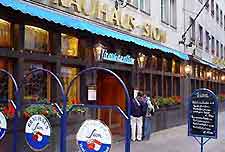 Cologne is truly full of action when it comes to both drinking and dining, with a wealth of bars, brewpubs and nightclubs around the vibrant Altstadt district, where you will also discover a number of popular beer halls. The Alter Markt (Old Marketplace) is a particularly popular place to eat out and this public square is lined with local pubs and cafes. Other lively spots with a range of eateries and bars include the areas around Friesenstrasse, the student quarter of Kwartier Lateng, and also within Cologne's Belgian quarter (Belgische Viertel) and its Ebertplatz area.

For many visitors to Cologne, the selection of fast-food restaurants along the High Street (Hohe Strasse) is hard to beat during the day, being especially close to many shops and local stores. For others who prefer a more leisurely approach to dining, a number of good eats can be found in the Südstadt district, and in particular around the Chlodwigplatz.