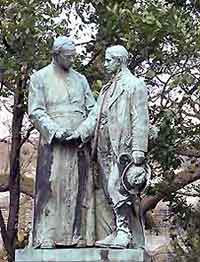 A handful of local art galleries stand out from the crowd in Cologne and deserve some time.

Also in Cologne, the Museum Ludwig and its post-modernistic pieces may be of interest, as to are the paintings by regional German artists within Cologne's Wallraf Richartz Museum in Martinstrasse.

Address: Bischofsgartenstrasse 1, Cologne, Germany, DE
Tel: +49 0221 2212 6165
The Museum Ludwig is housed in a particularly eye-catching building and showcases the best in 20th-century post-modern art. With works by many highly acclaimed 20th-century artists on display, such as both Andy Warhol and Jasper Johns, Cologne's Museum Ludwig also features an excellent group of photographs of various descriptions, all of which are displayed in spacious, well-lit surroundings.
Open hours: Tuesday to Sunday - 10:00 to 18:00
Admission: charge, concessions available

Address: An der Rechtschule, D-50667, Cologne, Germany, DE
Tel: +49 0221 221 23860
Housing an impressive collection of applied art stretching from the Middle Ages to the present day, the Museum of Applied Art should not be missed by lovers of design staying within the city of Cologne. The sheer extent of art objects displayed is inspiring, with collections of furniture, tapestries, dining and ornamental objects. Regularly changing exhibits offer an exciting alternative to the permanent collection and ensure new, dynamic interdisciplinary artistic approaches are explored.
Open hours: Tuesday to Sunday - 11:00 to 17:00
Admission: charge, discounts for students and seniors

Address: Pletschmühlenweg 7, Cologne, D-50224, Germany, DE
Tel: +49 0223 85 1054
The Holography Museum and New Visual Mediums is very much a specialist art museum and is of particular interest, since it is one of the very few of its kind. Established by Matthias Lauk in 1979, it has more than 1,000 exhibits, which are regularly rotated. A highlight is the museum's outstanding hologram collection, which ranks as one of the largest in the word. This collection features computer generated holograms, multiplex holography and various light and sound objects.
Open hours: Fridays - 14:00 to 20:00; Saturday and Sunday - 11:00 to 18:00
Admission: charge

Address: Martinstrasse 39, Innenstadt, Cologne, D-50667, Germany, DE
Tel: +49 0221 2212 1119
The Wallraf Richartz Museum is a recent addition to the arts scene in Cologne, opening at the beginning of the 21st century. With an impressive collection of art works, including a number of pieces by acclaimed German artist Ferdinand Franz Wallraf, the museum also boasts paintings by many other prominent European artists.
Open hours: Tuesday - 10:00 to 20:00, Wednesday to Friday - 10:00 to 18:00, Saturday and Sunday - 11:00 to 18:00
Admission: charge