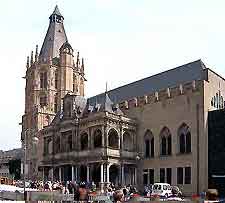 Cologne's wealth of tourist attractions makes it a popular stop-off for visitors to Germany.

The cobbled streets of the Old City are shadowed by the Cologne Cathedral, which is surrounded by centuries-old market places and dozens of outdoor cafés and similar attractions.

Soak up the atmosphere on a cruise along the Rhine, the city's lifeblood, or sip at a Kölsch beer at the Früh, a true Cologne institution. 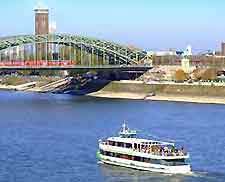 It would be a crime to come to Cologne and not experience a river cruise along one of the world's most well-known waterways, where you will pass many appealing attractions as you sit back and enjoy the views. Germany's oldest river is steeped in legend and has been the inspiration for countless songs and art works, while it has also been the basis of the city's economic success since Roman times. Still a busy port city, visitors can catch a day cruise to enjoy the nearby scenery, taking in some of Germany's famous wine country along the way.
Open hours: seasonal variations
Admission: charge, concessions available

Address: Aachener Strasse, Cologne, D-50933, Germany, DE
This historical cemetery outside of the old city walls, placed here in accordance with Napoleon's directives that burial laws should be in accordance with the traditions of Ancient Rome, is home to some of the city's most famous characters. While many come to Melatenfriedhof to see the graves of well-known Germans, the artistic splendour of some of the headstones also makes it of interest to artists or those simply looking for an atmospheric stroll among the cemetery's tree-lines paths.
Open hours: daily, March to October - 07:00 to 20:00; November to February - 08:00 to 17:00
Admission: no charge

Address: Riehler Strasse 173, Riehl, Cologne, D-50735, Germany
Tel: +49 0221 77 850
Cologne Zoo is the perfect family attraction and boasts an enormous collection of animals, including one of the biggest elephant parks in the whole of Europe. Other top attractions include the monkey island, giraffes, hippos, an indoor rainforest area, a modern owl house and an outstanding group of aquariums, where many brightly coloured marine fish reside, amongst beautifully landscaped coral reefs. If you time your visit right you will be able to enjoy the feeding displays and talks, which feature the zoo's penguins, sea lions and otters.
Open hours: daily, April to October - 09:00 to 18:00; November to March - 09:00 to 17:00
Admission: charge, concessions available 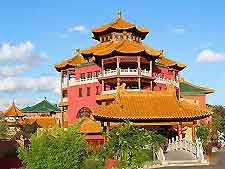 Address: Berggeiststrasse 31-41, Bruhl, D-50321, Germany, DE
Tel: +49 0223 23 6200
It is debatable whether the park lives up to its claim of being 'Europe's most unique theme park', but a day out at Phantasialand does guarantee plenty of fun. With all the attractions that you would expect from an adventure theme park, kids and adults alike can get splashed on the water rapids, spook themselves in the mystery castle, or simply lay back and relax in the lovely park. International cuisine is served up at various on-site themed restaurants, so that thrill-seekers do not have to leave the grounds for anything.
Open hours: daily - 09:00 to 18:00 (early April - late October)
Admission: charge, discount for groups, children under one metre are free

Address: Appellhofplatz 23-25, Cologne, D-50667, Germany, DE
Tel: +49 0221 26 331
This fascinating building was once the Gestapo's (secret police) headquarters during WWII. Almost untouched since then, EL-DE Haus acts as both a memorial and an enthralling exhibition, giving visitors an absorbing insight into the workings of this Nazi regime. Guided tours will take you past cells that once held Jews, homosexuals and other 'enemies' of this unimaginable regime. Further attractions on-site include the Nazi Documentation Centre, where you can digest the permanent exhibition entitled 'Cologne under National Socialism'.
Open hours: Tuesday to Friday - 10:00 to 16:00; Saturday and Sunday - 11:00 to 16:00
Admission: charge

Address: Am Hof 12, Cologne, D-50667, Germany, DE
A Cologne institution, no visitors should miss out on a taste of the city's best beer offerings at the Früh am Dom. The selection of German ales here is outstanding, with the locally-brewed Kölsch beer being a local favourite. The Früh, as it is known by residents, is not just popular with tourists, as the locals enjoy this place for its menu of national dishes too. Tuck into some German sausage and sauerkraut, which are amongst the other main attractions here, and come closer to understanding the rich German culture.
Open hours: daily - 08:00 to midnight
Admission: charge for food and drinks