Getting Around, Berlin Travel, Transport and Car Rental 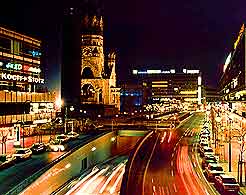 Berlin is a relatively easy city to get around. The centre is fairly compact and most of the sights are within walking distance of one another. Much of Berlin is pedestrianised and if you are in the city centre, there is an excellent bus network and local railway.

Alternatively, if you prefer to be driven around there are plenty of taxis, although these can prove an expensive way to travel. Walking is another good way to get around - the historic centre of Berlin is surprisingly compact and is easily explored on foot.

Address: 12529 Schonefeld, Brandenburg, Germany
Prior to 2008 Berlin was served by three busy airports, Berlin-Tegel (Otto Lilienthal) Airport (TXL) Berlin-Schonefeld (SXF) and Berlin-Tempelhof (THF), all handling a large number of international and domestic flights. However, as of 2008 operations were terminated at Tempelhof Airport as part of a plan to consolidate all commercial flights at Schonefeld.

From 2012 Tegel Airport is due to close and all service is to be undertaken by the newly built Berlin Brandenburg Airport (BER), which is located in Schonefeld and will replace the existing Schonefeld Airport (SXF) terminal building, whilst incorporating some of the former airport's facilities. 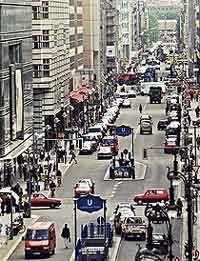 Traffic in Berlin has increased exponentially in the last few years and although the city can become somewhat congested at peak times, generally between 07:00 to 09:00 and 16:00 to 19:00, a car provides a very convenient way to travel outside of the city centre. The A10 ring road is a fast motorway that entirely circles the city and links Berlin with other German cities in almost every direction. With many one-way systems in the city, Berlin can be a difficult place to drive, although there are plenty of large roads in the centre that are easier to drive in. Major roads are prefixed with a 'B' and the motorways are prefixed with 'A' which stands for Autobahn. Parking in shopping areas can prove difficult at the weekends, so it is advisable to arrive early. The minimum age for driving in Germany is 18 years old, and traffic drives on the right-hand side of the road. Seatbelts must be worn at all times and children under 12 years old are forbidden to travel in the front of the car without a suitable child restraint.

Major car rental companies are represented well throughout Berlin and these include Europcar, Hertz, Sixt and Avis. To rent a car you must show a full national driver's licence and be over 21 years old, although some companies may make exceptions. Cars can be either rented per day or per week and third party insurance is included in the price. You can drive to Hamburg in just over three hours and Dresden in about 2.5 hours.

Berlin has a large and reliable network of buses and is also well-connected to the rest of Europe by long-distance bus. Operated by the Berliner Verkehrsbetriebe (BVG), the bus services cover the whole city and run daily from 06:00 to 23:00. The city is divided up into zones and for most visitors, the zone AB tariff is the most frequently used. There is also a reliable and convenient network of 28 trams that runs in East Berlin. The BVG information centre is situated in front on Bahnhof Zoo, in the pavilion at Hardenbergplatz and this is open daily from 06:00 to 22:00. There is a BVG counter at Tegel airport as well. An alternative way to get around Berlin is by the many hop on / off tours and shuttle buses, which operate in and around the city and provide an ideal way to both sightsee and travel.

Tickets can be purchased for trams and buses from automated machines at shops, stations and also for buses, from the driver, who will only usually sell day tickets, two-hour tickets and short distance tickets. Many passes are also available, such as day tickets and week tickets, which also include reductions on many attractions in and around Berlin.

Germany's efficient national rail service provider is Deutsche Bahn and this is one of the best railway networks in Europe. The busiest station in Berlin is Bahnhof Berlin Zoologischer Garten, often referred to as simply 'Bahnhof Zoo', which is located in the western side of the city and offers a wide range of facilities, such as tourist information. However, construction is currently underway for a huge new station, Bahnhof Lehrter, which will join the north / south and east / west lines together, although this is not due for completion until around 2006. The efficient railway service, which includes high-speed InterCityExpress (ICE) trains, offers comprehensive travel across the city and country and has other mainline stations dotted across the city. Travelling to Hanover by InterCityExpress can take as little as 1.5 hours and Frankfurt is only 3.5 hours away.

The U-Bahn (underground railway) and S-Bahn (electric surface railway) provide a quick and convenient way to travel around Berlin and they link Berlin's eastern and western city centres. There are 10 U-Bahn lines and 13 S-Bahn lines, which operate across a wide network of routes throughout most of the city. They run between 04:00 to midnight and the U-Bahn trains tend to run more frequently. U-Bahn routes U1 and U9 also provide a limited service throughout the night, with two trains running every hour. Also, most S-Bahn trains run overnight at the weekends, between midnight to 04:00.

The main stations are located on the S-Bahn spine, which runs from west to east across Berlin. There are plenty of connections to the U-Bahn network and north / south S-Bahn lines can be accessed directly or by a short journey on the main east / west line. Outside the main stations, taxis and buses are readily available.

Tickets for both trains systems can be purchased from the orange machines at the entrances to U-Bahn stations and there are basic instructions in English. Day tickets are probably the cheapest way to travel, if you intend to use these services on a regular basis and these tickets can also be used on the buses.

Many of Berlin's taxis are made up of beige Mercedes Benz sedans and provide a convenient way to travel. Prices are based on metered mileage and there is a minimum charge. There are numerous taxi stands throughout the city and beside all main train stations, and these are known as 'call columns'. In the inner city there are also some pedicabs, called Velotaxis, which seat two people and are powered by a small electrical engine. These are ideal for short journeys and can easily be either flagged down or booked and they provide a cheaper alternative the larger taxis.

Berlin has an extensive network of bicycle paths which are generally very flat, making this a popular and easy way to travel around Berlin. It is a great way to see the city and there are specially marked cycle lanes almost everywhere, as well as plenty of bicycle rental shops. Bicycle hire is either charged per day or per week and insurance is included.

There are both seasonal and year-round ferry services that regularly travel to the ports of Hamburg, Kiel, Lubeck and Rostock. These are also linked to Berlin by road and rail. The trip can be quite scenic and fairly inexpensive.