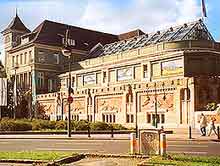 There are a series of important and appealing art galleries based in Berlin, which reliably draw the tourists and visitors to the city. There is much to choose between these venues, with the Alte Nationalgalerie (Old National Gallery) being worthy of consideration, dating back to 1861 and showcasing works from the Berlin National Gallery Collection.

Located at the Kulturforum (Culture Forum), the Neue Nationalgalerie (New National Gallery) opened its doors to the paying public in 1968 and specialises in modern art from the 20th century, with its podium roof plaza being used as an open-air exhibition space for public sculptures. Also of note is the international renowned Altes Museum, the Gemäldegalerie, and the unusual outdoor East Side Gallery, which is regarded as being a memorial for freedom and features works spread along just over 1 km / 0.6 miles of the remaining Berlin Wall, on the Mühlenstrasse.

Address: Schlosstrasse 1, Berlin
Tel: +49 (0) 30 326-9580
With paintings from world-famous artists, such as Van Gogh, Cézanne, Picasso, Giacometti and many others, this small museum / gallery is dedicated to the history of modern art and is home to the Berggruen Collection. It used to be a museum of ancient art, but was reopened in 1996 and quickly gained a reputation as one of the favourite exhibition spaces currently residing in the city.
Open hours: Tuesday to Friday 10:00 to 18:00, weekend 11:00 to 18:00
Admission: charge

Address: Mühlenstrasse / Oberbaumbrücke, Berlin
The longest section that remains of the Berlin Wall has been transformed into a wonderful open-air gallery, which is probably the largest of its kind in the world and comprises some 100 individual paintings in total. Individual works or art were created by 118 artists from all over the world in 1990 and this attraction was declared a historic monument. Over the years, a large number of the paintings became damaged by both erosion and vandalism, and a full restoration project has recently been completed.
Open hours: daily
Admission: free 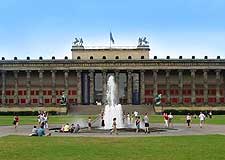 Address: Am Lustgarten , Berlin
Tel: +49 (0) 30 2090 5566
The Old Museum was the first building on Museum Island and was designed by Karl Friedrich Schinkel in 1830. Inside there is much to see, with art and sculpture from both ancient Rome and Greece. Other interesting features include post-war East German art and a large etching / drawing collection with works from both old masters and current day artists. There is also a famous rotunda featuring sculptures of Zeus and his entourage.
Open hours: Tuesday, Wednesday and Friday to Sunday 10:00 to 18:00, Thursday 10:00 to 22:00
Admission: charge, free on first Sunday of each month 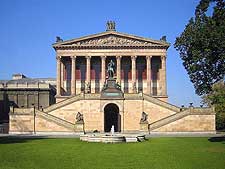 Address: Bodestrasse, Berlin
Tel: +49 (0) 30 2090 5555
Reopened in December 2001, after a thorough restoration, The Old National Gallery showcases work from artists like Caspar David Friedrich, Lovis Corinth and Adolph Menzel, and impressionists such as Monet, Renoir, Degas and Cézanne. There is a wide range of 19th-century European art to see and also featured are some of the paintings that were previously on view at the Gallery of the Romantics at Schloss Charlottenburg. There are also some sculptures by Rodin, amongst others.
Open hours: Tuesday, Wednesday and Friday to Sunday 10:00 to 18:00, Thursday 10:00 to 22:00
Admission: charge 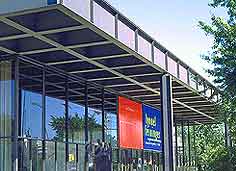 Address: Kulturforum, Potsdamer Strasse 50, Berlin
Tel: +49 (0) 30 2090 5566
Just a short walk from the Kulturforum complex is the New National Gallery, which specialises in paintings and sculpture of the 20th century, up until the 1960s. Major artists and styles are represented here, with highlights being cubism displays by Picasso and Gris Leger, and also surrealism art by Dali Miro and Max Ernst. There are many exhibitions and interesting displays in this gallery and also there is a sculpture garden outside which is a great place to sit and relax, particularly on a sunny day. This gallery contains many splendid German paintings, and the highlight of this comprehensive collection is Cityscapes by Otto Dix and George Grosz.
Open hours: Tuesday, Wednesday and Friday 10:00 to 18:00, Thursday 10:00 to 22:00, Saturday and Sunday 11:00 to 18:00
Admission: charge

Address: Matthäikirchpl. Gemaldagalerie, Berlin
This cultural centre groups all of the main museums that exhibit mainly European art. It is situated in the west side of the city and includes a large hall where chamber music is regularly played and also a Musical Instrument Museum (Musikinstrumentenmuseum). In 1998, a new art gallery was opened called the Gemäldegalerie and this is now home to a fabulous collection of art from the 13th to 18th century and it part of the Arts and Crafts Museum Kunstgewerbemuseum). There is also an interesting sculpture garden which is worth a visit.
Open hours: Tuesday to Sunday 10:00 to 18:00
Admission: charge

Address: Kulturforum, Matthäikirchplatz 8, Berlin
Tel: +49 (0) 30 266 2010
The Gemäldegalerie is part of the large Tiergarten Museum Complex, also known as the Kulturforum, which has recently been built and contains enough museums and cultural forums to fill an entire day. This large picture gallery features over 900 paintings in various collections, many of which were stashed away for safekeeping all over Berlin during the war years, and have only recently been reunited as one collection again. With many early European paintings, German works of the middle ages and Renaissance period, a Netherlandish section, a Dutch and Flemish collection and many Italian paintings by famous artists such as Botticeli, Masaccio, Mantegna, Raphael and Titian, this gallery is well worth a visit.
Open hours: Tuesday to Sunday 10:00 to 18:00, Thursday 10:00 to 22:00
Admission: charge

Address: Westlicher Stülerbau, Schlossstrasse 1, Berlin
Tel: +49 (0) 30 2090 5555
The Sammlung Berggruen gallery is directly opposite the Egyptian Museum and features around 75 paintings, drawings and sculptures by Picasso in an exhibition entitled 'Picasso and His Time'. These are on loan to the museum by a private art collector and this display provides a fascinating insight into his work, over a period of many years. There are also many other pieces, including work by Paul Klee, Cézanne and Van Gogh as well as some interesting African sculptures, which actually provided inspiration for some of the work by Picasso and Klee.
Open hours: Tuesday to Friday 10:00 to 18:00, Saturday and Sunday 11:00 to 18:00
Admission: charge