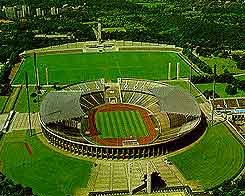 There are an enormous amount of sports available to visitors in the city of Berlin and being only minutes away from open countryside, there are many activities to tempt all lovers of the outdoors. Berlin's sporting calendar is full of exciting events throughout the year.

Built in 1936, the grand Olympic Stadium (Olympiastadion) is the venue for many of Berlin's largest football matches. The Hertha BSC football team regularly play at the stadium in the First Division (Bundesliga), competing against other prominent German teams. Soccer is a very popular sport in Germany and more recently has received even more interest after the announcement that Germany will be staging the World Cup in 2006.

There are plenty of fitness centres and gymnasiums in the city, with some being fairly centrally located. They usually include circuit training, weights, aerobics, and other fitness classes, saunas, steamrooms and a few even have swimming pools. Most are open weekdays between 06:00 to 23:00 and at weekends, from 10:00 to 22:00.

In the Berlin area there are 16 golf courses of varying quality and some of these also offer equipment and training. Public courses charge per round of golf and the green frees tend to be more expensive at the private clubs. Golf-Zentrum Berlin-Mitte, Chausseestrasse 94-98, is a public course that is situated in the city centre, offering practice, training and equipment between 07:00 to 22:00.

In Berlin there are plenty of places to swim and in the summer these include the nearby beaches in West Berlin, on Wannsee and Tegeler See, or Grosser Müggelsee, which is located in the East. There are public pools at Bad am Spreewaldplatz, Wiener Strasse 59, in Kreuzberg and also at one of Berlin's largest sports centre, The Sport- und Erholungszentrum (SEZ), Landsberger Allee 77, in Friedrichshain.

Every May at the Rot-Weiss Tennis Club, in the Geunewald forest, the German Open women's tournament takes place. Many high-ranking players are attracted by this competition and is has become a popular sporting event in the city. For tickets, contact major ticket outlets or the tennis club directly.

There are plenty of tennis courts available for games throughout the city and many of these have several courts, and also some squash courts. Rates vary and are charged depending upon the time of day, with late afternoon and evening being the peak time.

In the German league of men's basketball, Alba Berlin is one of the top teams and regularly competes in Europe. They regularly play at the Max-Schmeling-Halle , Prenzlauer Berg and tickets can be easily purchased.

Other sporting activities include