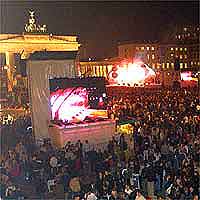 Berlin's calendar is full of many events throughout the year, with annual fairs, exhibitions, festivals, including the International Film Festival Berlin, the second largest in the world, many parties and a wide range of concerts.

Leading magazines detailing upcoming events and happenings are regularly published and they contain the latest listings of events throughout this lively city and are aimed specifically at tourists and visitors. These magazines are a useful source for shopping, dining and entertainment - providing you with a huge choice of things to see and do in Berlin.

Berlin is a great town for live music. On a given night, you can find almost anything, rock, pop, jazz or blues, traditional, country, or folk. Music and dance concerts take place in many of Berlin's venues, including theatres, churches, clubs, and sports stadiums, where international performers often play. Open-air concerts are often held at the Waldbühne, Am Glockenturm, near the Olympic Stadium and many major rock concerts take place at Columbiahalle, Columbiadamm.

The world famous Berlin Philharmonic Orchestra performs at the grand Philharmonie, Herbert-von-Karajan-Strasse 1, and also the Kammermusiksaal der Philharmonie, within the venue, hosts chamber players, soloists and small orchestras. One of Berlin's most elegant venues for classical music is the Konzerthaus Berlin, Gendarmenmarkt 2 , which is home to the Berliner Sinfonie-Orchester. The Court Opera House was built in 1741 and is the premier venue for opera, ballet and also many concerts.

There are several theatres in the city that produce a range of productions, ranging from traditional 20th-century plays to more modern and contemporary pieces.
Top addresses are The Deutsches Theater und Kammerspiele, Schumannstrasse 13A, The neo-Baroque Berliner Ensemble, Bertolt-Brecht-Platz 1 and the Volksbühne am Rosa-Luxemburg-Platz, Linienstrasse 227.

There are over 100 cinemas in the city of Berlin and the new releases are often shown in the original English version with German subtitles. Throughout the city, weekly film releases are advertised on posters. In the summer, some films are screened outdoors in the Volkspark Hasenheide and at the Waldbühne, near the Olympic Stadium, and this is a popular event.

Berlin is without doubt one of Europe's most lively party cities. The Eastern side of the city is where most of the action can be found and there are more bars and cafés here than in any other European city - and much 24-hour entertainment. There are many good places to start your evening, all with numerous bars and a friendly atmosphere. You need to be at least 18 years old to enter bars in the city and nightclubs generally have a small admission charge, but do not usually have any restrictions with dress codes and there are no fixed closing times. There are also several casinos in the city that require a form of identification, such as a passport, before you are allowed to gamble.