Berlin has become famous for its Museum Island (Museumsinsel), where culture and tourism are happily combined. This prestigious complex consists of five separate museums and is home to a wonderful collection of 19th-century art, together with well-known archeological relics. Construction of these buildings started in 1830 and it was more than 100 years until everything was finally complete.

Built in 1790, the Charlottenburg Palace (Schloss Charlottenburg) in Berlin was originally a summer residence for the wife of King Frederick II and visits to the Old Palace are only available by guided tour. There are many other parts of this complex which are worth seeing, including the New Wing, the Orangerie, the mausoleum and its collection of museums, such as the Berlin Egyptian Museum. Several art galleries stand nearby, where paintings by the world-famous artist Pablo Picasso are displayed. 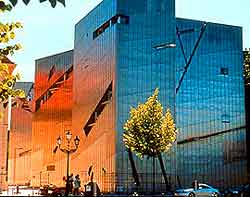 Address: Lindenstrasse 9-14, Berlin, Germany
Tel: +49 (0) 30 2599 3300
This splendid memorial to Jewish life in Berlin was designed by Daniel Liebeskind and remembers the history of German Jews over hundreds of years. Based on the design of a shattered 'Star of David', there are many permanent displays and interesting exhibits in the large rooms within this stylish building. It can be easily reached by either U-Bahn or bus.
Open hours: Tuesday to Sunday 10:00 to 20:00, Monday 10:00 to 22:00, closed on Jewish holidays
Admission: charge

Address: Schlossstrasse 70, Berlin, Germany
Tel: +49 (0) 30 320 911
This Egyptian Museum is situated on the outskirts of Berlin and amongst its many exhibits is the spectacular portrait bust of Queen Nefertiti, a sculpture of a famous Egyptian Queen that is over 3,000 years old. There are also some well-preserved mummies and a collection of artifacts dating from 4,000 BC. Formerly the east guardhouse and residence of the Prussian king Friedrich I's bodyguard, this museum is near to Schloss Charlottenburg.
Open hours: Tuesday to Sunday 10:00 to 18:00
Admission: charge 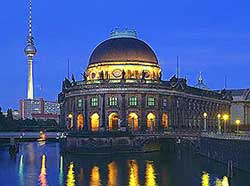 - Am Kupfergraben, Berlin, Germany
Tel: +49 (0) 30 2090 5577
Visitors to Museum Island particularly enjoy spending time at the Old National Gallery (The Alte Nationalgalerie), where exhibits include German paintings and sculptures, as well as some important works of art from some of the French impressionists and 24 paintings by Caspar David Friedrich. The Old Museum (Altes Museum) is a striking building, designed by Karl Friedrich Schinkel. The main floor displays an extensive collection of antiquities and the upstairs galleries are home to many changing exhibitions.
Open hours: hours vary
Admission: charge

Address: Am Kupfergraben, Berlin, Germany
Tel: +49 (0) 30 208 050
Built between 1910 and 1930, this is probably one of the most important museums of ancient history existing in the world. The Pergamon Museum dates back to 180 BC and features a wide range of classical Greek, Roman, Islamic, Babylonian and Middle Eastern art and architecture, with many important acquisitions being made by 19th-century German archaeologists. Particularly noteworthy is the stunning Pergamon Altar of Zeus, as well as the Ishtar Gate, the Market Gate of Miletus and the Mshatta facade. In total there are three world-class collections - the Collection of Classical Antiquities, the Museum of Near Eastern Antiquities and the Museum of Islamic Art. Audio-guides provide detailed commentary about the displays and these are included in the admission price. There are also several information sheets, which are available in many different languages at selected exhibits.
Open hours: Tuesday, Wednesday and Friday to Sunday 10:00 to 18:00, Thursday 10:00 to 22:00
Admission: charge

Address: Matthäikirchpl. 8, Berlin, Germany
Tel: +49 (0) 30 2660
Full of art and culture, the Kulturforum is located west of the Potsdamer Platz. This attraction consists of a group of renowned museums and concert halls and highlights include the Berliner Philharmonie, a concert hall with wonderful acoustics, the somewhat smaller Chamber Music Hall, the Picture Gallery, which has a large collection of 13th- to 18th-century European paintings, the Museum of Prints and Drawings and the interesting Museum of Applied Arts. Tickets can be purchased that allow entrance to all the museums and galleries, and The Gemäldegalerie, one of the best art galleries in the whole city, includes a collection of numerous European paintings dating from the 13th century.
Open hours: Tuesday to Sunday 10:00 to 18:00
Admission: charge

Address: Bernauer Strasse 111, Berlin, Germany
Tel: +49 (0) 30 464 1030
This museum was almost seven years in the making, as many East Berliners that live nearby wanted to forget about the wall that separated the area next to their houses. It is the only actual section of the Berlin Wall border system that is left standing in the city and provides some fascinating information about this imposing structure that divided the city for over 28 years. Covering 70 metres / 230 feet, this stretch of the Berlin Wall is complete, consisting of two walls with a narrow control path down the centre, where the border guards used to patrol with their German shepherds. Many people where killed trying to swim to the West across the nearby River Spree, and these individuals are remembered by a series of plaques marking the names of those that were identified. There are a number of permanent exhibitions that document the history of the Berlin Wall and record the famous paintings on the Western side of the division.
Open hours: Wednesday to Sunday 10:00 to 17:00
Admission: free

Address: Kulturforum, Matthäikirchplatz 8, Berlin, Germany
Tel: +49 (0) 30 266 2002
Inside the Museum of Applied Art you will find a wide range of arts and crafts and highlights include wonderful Art Deco ceramics, 16th-century silver chalices, beautiful Venetian glass, decorated earthenware (majolica) and medieval treasures, such as the 34 pieces of silverware that used to belong to Lüneburg town councillors. Of particular interest is the Guelf Treasure (Welfenschatz) where there is a dome shrine that is believed to have contained the head of St. George. There are also some interesting pieces on display upstairs, such as the 'crazy suite of furniture' by Carlo Bugatti in 1885, comprising Japanese, Islamic and Native American design and also some historical board games, Meissen porcelain and amazingly detailed works in ivory. The museum is easy to reach by U-Bahn / S-Bahn or by bus.
Open hours: Tuesday to Friday 10:00 to 18:00, Saturday and Sunday 11:00 to 18:00
Admission: charge

Address: Potsdamer Strasse 2, Berlin, Germany
Tel: +49 (0) 30 300 9030
On the ground floor of the Sony Centre is the Film Museum Berlin, which fondly remembers many of the city's great film successes. Special attention is given to the city's films made during the very early cinematic era and there is also a large exhibition about Marlene Dietrich, with many interesting facts about the star.
Open hours: Tuesday, Wednesday and Friday, Sunday 10:00 to 18:00, Thursday 10:00 to 20:00
Admission: charge