The German capital of Berlin is encircled by an enormous greenbelt comprising a series of huge parks, some of which are almost as big as the city itself. Considerably smaller and more central are the parks of Fennpfuhl, Volkspark Humboldthain, Volkspark Friedrichshain and Waldeck, while the acclaimed Botanical Garden lies within the south-western zone, alongside the campus of the Free Universitat Berlin.

The city's two zoos also provide interesting distractions and are set within large parks - the Tierpark and Tiergarten, filled with mature trees and benches. Located to the far south-west and close to Potsdam, the gardens of Peacock Island were built in the early 19th century by well-known landscape designer Peter Lenné, who created a typical English-theme on this small island. 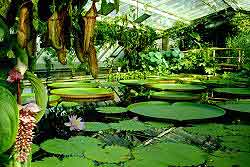 Address: Königin-Luise-Strasse, Berlin
Tel: +49 (0) 30 8385 0100
The city's Botanical Garden is spread over 108 acres / 43 hectares and is home to more than 20,000 different species of plant from all over the world. There are vast hothouses and also 16 large greenhouses, which are full of exotic plants, and each greenhouse focuses on a different climate region. The gardens date back to the latter part of the 19th century and are beautifully arranged. The grounds are also home to the Botanical Museum, which provides scientific background information about plants. This stunning attraction is only a 15-minute walk east of Dalhem-Dorf (U1) U-Bahn station. 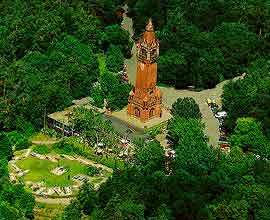 In the south-western corner of Berlin is a large forest, bordered on the west by the River Havel. This expanse of woodland contains many paths leading to several lakes and also to the Grunewaldturm Tower, which was built at the end of the 19th century as a memorial to Kaiser Wilhelm I. This tower is 55 metres / 180 feet tall and contains a restaurant with views across the lake. Large areas of this forest have become important nature reserves and these animal havens are full of a whole range of wildlife. There is also an old lodge that contains a museum displaying antique furniture, Dutch and German paintings, while one of the outbuildings is a small hunting museum.

Address: Am Tierpark 125, Berlin
Tel: +49 (0) 513 8141
This large and well laid-out park contains the castle, Schloss Friedrichsfelde, which was completely restored between 1973 to 1981. After the Second World War, parts of the castle were actually used to house animals from the adjacent Tierpark Zoo, which opened in 1954. There are now over 8,000 animals in this large zoo, representing almost 1,000 different species. Most live in naturalistic open habitats, surrounded by moats, and there are many rare and endangered species here, including wild horses and oryx antelopes. 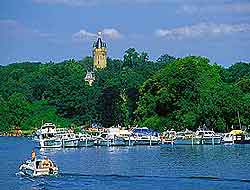 Address: Pfaueninselchaussee, Berlin
Tel: +49 (0) 30 805 3042
Peacock Island's pretty gardens surround a palace known as 'Schloss Pfaueninsel,' which was constructed in 1794 for Prussian king Friedrich Wilhelm II and his many mistresses. Although it appears as a ruin, this was actually intended and it was designed to appear this way when it was originally built. This palace, together with the garden and its many seasonal flowers, give Peacock Island a romantic atmosphere and it has become a very popular summer retreat. It can be reached by ferry to Pfaueninsel.
Open hours: daily, November to February - 10:00 to 16:00; March and October - 09:00 to 17:00; April and September - 08:00 to 18:00; May to August - 08:00 to 20:00
Palace: April to October - Tuesday to Sunday 10:00 to 17:00

The Tiergarten is Berlin's central park and covers a vast area of more than 630 acres / 252 hectares. Originally a hunting preserve for royalty, it is now full of playgrounds, marble sculptures and over 14 miles / 23 km of pathways, providing a great place to get away from the city. With a strong feeling of the countryside, there are beautiful flower gardens, mature trees, shady areas, benches galore, canals and even a lake in the south-western section, near one of the world's oldest zoos, where you are able to rent a rowing boat. There is also a café and beer garden, and probably most surprising of all, a secluded area set aside for nudists, who often come here to sunbathe in peace and quiet.

The World Culture Centre can be found in the heart of the park, which is nicknamed the 'pregnant oyster' because of its design. Nearby is the tall Victory Column, which is 69 metres / 226 feet high and provides superb views across the city. This scenic park is a great place to come for a walk, bike ride or picnic, and is popular with both locals and tourists alike.
Opening hours: daily, 24 hours
Admission: free 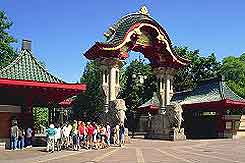 Address: Hardenbergpl. 8 and Budapester Strasse 34, Berlin
Tel: +49 (0) 30 254 010
Since they opened in 1844, the Berlin Zoological Gardens have grown into the largest zoo on the planet, with over 17,000 animals and more than 1,500 different species. Situated in the south-western corner of the Tiergarten park, this is the most historic zoo in Germany and after being destroyed during World War II, the zoological gardens were carefully redesigned to create surroundings as close to the animals' natural environment as possible. This has resulted in very successful breeding programmes, including high birthrates for rare and endangered species. The main entrance to the zoo is through a picturesque Asian-style Elefanentor (Elephant Gate). Next door is a large aquarium centre, with an impressive collection of fish and also some reptiles.
Open hours: daily, November to February - 09:00 to 17:00; early March - 09:00 to 17:30; late March to September - daily 09:00 to 18:30
October - 09:00 to 18:00
Admission: charge, combined zoo and aquarium tickets are available