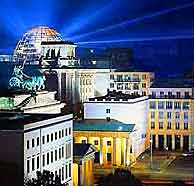 Sightseeing in Berlin is likely to be an important part of any visit to this city and there are certainly many typically German tourist attractions to savour. Taking a bus tour of Berlin is a very good way to start and with multilingual commentary, you will also learn a little about the main attractions as you drive around.

Tourists should certainly look out for the Brandenburg Gate, which has become one of the city's most recognisable and photographed attractions, as well as the 'Story of Berlin' Exhibition, the trendy Potsdamer Platz and the hard-to-miss Television Tower (Fernsehturm). Another sight to behold is the magnificent Schloss Charlottenburg, the city's largest and most impressive palace, famed for its elaborate rococco and baroque late-17th century architecture.

Of note, the 'Berlin Welcome Card' provides large discounts of up to 50% on museum and attraction admissions, as well as free inner-city transport on trains and buses. It is available at tourist offices, ticket offices and at some hotels, and is valid for three days.

Guided hop on / off bus tours operate throughout the day at regular intervals in central Berlin and are available from a number of different companies. They provide an easy way of sightseeing and with daily hop on / off tickets, they are also a very useful way to travel since you can leave the bus to explore and get back on when you are ready. Most run from the centre of West Berlin to the East, travelling through the Tiergarten and then passing by the Reichstag.

In the summer there are many boat tours that are available, which can be an interesting way to see some of the city. Walking tours are also becoming popular and the routes take in many of the neighbourhoods, architecture and some of the more unusual cultural institutions. There are a variety of themed walking tours that focus on specific areas of the city, such as Jewish life and popular artists. 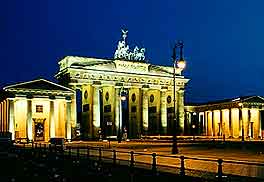 Address: Unter den Linden, Berlin
Commissioned by Friedrich Wilhelm II in the 1700s to represent peace, the Brandenburg Gate is nothing short of an iconic symbol of the city. Originally built as a customs post, the gate was an integral part of the Berlin Wall and remained locked for the duration of the Communist rule. When the wall that was once the boundary between East and West Berlin was knocked down, the gate became an important symbol of German reunification and it is the only one out of 18 such gates that now remains. Built in 1791 by Carl Gotthard Langhans, a detailed sculpture of the beautiful goddess Victory resides at the top of the structure. When Napoleon occupied Berlin in 1806 he stole this statue and took it back to Paris, but it was returned to its rightful home again in 1814. When the Berlin Wall was erected in 1961 the tor became a symbol of the division and when the wall was finally destroyed in 1989, Berlin held its main celebrations around the building. Over the years the Brandenburg Gate has been the backdrop for many protests and rallies by political groups and now, after two years of restoration, it stands majestically in the centre of Berlin. It joins the two sides of the city and there is a busy road underneath it. In the gate's north wing there is the Room of Silence (Raum der Stille) where you can sit in peace and quiet, contemplating the splendid architecture, which was inspired by the entrance to the Acropolis in Athens.
Open hours: daily 09:30 to 18:00

The 'Story of Berlin' Exhibition

Starting from the 13th century, this exciting exhibition details the history of Berlin right up to the present day. Features include some of the original sections of the historic Berlin Wall and also an actual nuclear bomb shelter from the 1970s. 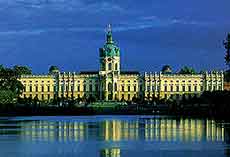 Potsdamer Platz and the New Centre

In the 1900s this was one of the busiest squares in the whole of Europe and when the Berlin Wall was built it had a platform that allowed Westerners to look over the wall and into the eastern part of the city. After many years of neglect, recent restoration and renovation have created a wonderful new, vibrant area, full of shops, bars, cafés, restaurants and many other venues for entertainment. Once again it is a thriving square and is rapidly becoming the heart of the city. There are many modern constructions and the Sony Centre has a large, contemporary roof that resembles a sail. For some of the best views in the city, visit Panorama-Point, which is situated at the very top of the tall Kollhof building. A lift is available and it is thought to be the fastest lift in Europe. The Potsdamer Platz is easy to reach by either U-Bahn, S-Bahn or bus. 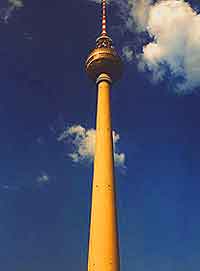 Address: Panoramastrasse 1A, Alexanderplatz
Tel: +49 (0) 30 242 3333
The Fernsehturm television tower is the tallest structure in the whole of the city and features both an observation platform and also a restaurant, which revolves slowly. This incredibly tall structure is 368 metres / 1207 feet high and there is an elevator that takes you up over 200 metres / 660 feet to a viewing platform and the restaurant. From here you can see all across the city and there are spectacular, panoramic views, probably the best in East Berlin. Because of these wonderful views, the restaurant can get very busy and so reservations are recommended. There are many neon signs that surround the base of this tower and the reflections caused by sunlight form a Christian Cross on the tower. It can be easily reached by U-Bahn, S-Bahn at Alexanderplatz stops, or by bus.
Open hours: daily
March to October - 09:00 to 01:00
November to February - 10:00 to midnight
Admission: charge

The Unter den Linden is a long avenue that stretches 1 mile / 1.5 km from the Brandenburg Gate (Brandenburger Tor), one of Berlin's most recognisable landmarks, to the Schlossbrücke. Before it was developed as a showpiece road, Unter den Linden was just a simple riding path that connected the Tiergarten to the Berliner Stadtschloss. The enormous linden trees were planted in the 17th century, but the striking blend of neoclassical and baroque structures continued to be built for another 100 years. With heavy damage in the war, much of the architecture in this splendid avenue now reflects postwar tastes and the eastern part has been beautifully restored. Some of Berlin's most treasured and important buildings lie on this road and these include the German State Opera (Deutsche Staatsoper) and the German Historical Museum (Deutsches Historisches), which is housed in the Arsenal (Zeughaus).

Situated in the heart of Berlin's Jewish district (Scheunenviertel), the New Synagogue was built in 1866 and was badly damaged by bombing in 1943. It was restored in the mid-1990s and highlights include the Moorish Dome, a Jewish Centre, complete with exhibition, and the Old Jewish Cemetery (Alter Jüdischer Friedhof) which is situated nearby in Schönhauser Allee .
Open hours: Monday to Thursday 08:00 to 16:00, Friday 08:00 to 13:00

Address: Am Juliusturm
Tel: +49 (0) 30 3549 44200
Built in the 16th century, this ancient fortress is surrounded by a moat and is now the oldest building in Berlin that is not religious. Guided tours of the Spandau Citadel are available at the weekend, but only by advanced request, and this is an interesting way to learn about the history of the structure. There are many Jewish gravestones that are built directly into the fortress wall. It is situated near to the River Havel and overlooks the small town of Spandau. This is a charming area of the city and is well worth a visit.
Open hours: Tuesday to Friday 09:00 to 17:00, Saturday and Sunday 10:00 to 17:00
Admission: charge