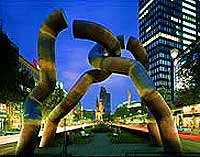 Being the proud German capital, Berlin comes with a number of noteworthy historical landmarks, which managed to survive the devastation at the time of the Third Reich and WWII. After the war ended, much restoration work ensued, to ensure that the most salvageable architectural monuments were rescued.

The government's Reichstag building (known as the Plenarbereich Reichstagsgebaude in German) was built in order to accommodate the German parliament (known as the Bundestag) and came into being after a competition was held in 1872, attracting just over 100 architects. Various delays resulted in a further contest being staged, when this time more than 200 entrants submitted their designs.

The foundation stone was laid in 1884 and the Reichstag was completed just one decade later. Today, this iconic Berlin landmark still appears rather like a grand palace, topped by a very stylish glass dome. More than one million visitors come here every year, to perhaps climb to the very top of the dome and enjoy the impressive cityscape views (advance registration is now required for this activity), or alternatively, the rooftop restaurant may appeal. You can also check out the chamber of the government, or perhaps enjoy guided tours of the Plenary outside of any parliament sessions.

Address: Am Lustgarten, Berlin, Germany
Tel: +49 (0) 30 2026 9136
This is the main cathedral in the city of Berlin and you are able to climb to the very top of its dome, where you have great views across the city. Resembling St. Peter's Basilica in Rome, other interesting features include large marble pillars, a small exhibition about the history of the building, and a vault housing 90 sarcophagi containing the remains of various members of the Prussian royals, who this ornate cathedral was built for in the 19th century. Its main nave was reopened in 1993, after a 20-year renovation period. 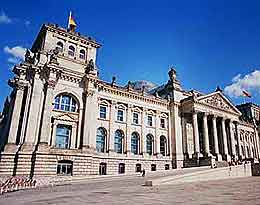 Built between the years of 1884 and 1894, the Reichstag has led a chequered past, being damaged by fire in 1933 (caused by Nazi supporters), bombed during the Second World War by the Allies, and even attacked by Russian troops in 1945 (some Russian graffiti remains from this time).

The Reichstag remains an important landmark building in an excellent state of repair, following extensive renovation and reconstruction work in the 1990s, and now houses the united German parliament again - the first time since 1933. During its period of reconstruction, conceptual artist Christo arrived, with his wife Jeanne-Claude, and proceeded to wrap the entire building in approximately 100,000 metres / 328,000 feet of polypropylene, tied with a blue rope. This peculiar art work lasted for just a matter of weeks and cost some $9 million, drawing huge crowds of onlookers at the time.

Address: Gendarmenmarkt 1, Berlin, Germany
The Gendarmenmarkt is one of the city's most splendid plazas, being home to a collection of beautiful neoclassical buildings. Leading Prussian architect Karl Friedrich Schinkel designed the Schauspielhaus, which is now named the Konzerthaus Berlin. There are two churches nearby, the Deutsche Dom - displaying an exhibition on German history dating from the 1800s to the present-day, and the Franzosische Dom - which has a viewing platform at the top of its tall tower and is also home to the Huguenot Museum. 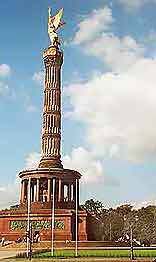 Address: Breitscheidplatz, Berlin, Germany
Tel: +49 (0) 30 218 5023
Built in the 1800s, this church was very badly damaged during the Second World War. It was almost entirely destroyed, with only its west tower remaining, and was left as a ruin - a poignant reminder to people of the terrible destruction that can be caused by war. In the 1960s, a modern tower and chapel were added to the site and now this pretty building is heavily dominated by blue-stained glass features. This structure, together with its ruins, is often referred to by locals as the 'lipstick with compact case'.

Address: Oranienburger Strasse, Berlin, Germany
Destroyed in World War II, this huge, grand building was the capital's largest synagogue and was originally constructed in 1866. Some restoration work has taken place, reconstructing the large, gold-latticed dome and also the front part of the building. There is a permanent exhibition in the Centrum Judaicum, which displays information about the history of Jews in Berlin and the synagogue itself.

Address: Olympischer Platz, Berlin, Germany
Tel: +49 (0) 30 306 88100
It was at this famous stadium where the 1936 Olympics took place, being built for this event. During the course of the games, a number of world records were set here, including no less than five by American track and field athlete Jesse Owens. The stadium is without doubt one of Berlin's most noteworthy landmarks originating from the Nazi period. Visitors can only view the exterior of the Olympiastadion, unless attending one of its frequent concerts or sporting events, with the overall capacity topping 75,000 spectators.

Address: Luisenplatz, Berlin, Germany
Tel: +49 (0) 30 3209 1275
This splendid Prussian monument serves as a real reminder of the imperial days of Berlin and still stands out as one of the most impressive buildings in the city. Situated on the outskirts, it was originally a modest summer home to the Prussian rulers of the time and was built in 1695. It was not actually completed until almost 100 years later.

This is one of the oldest surviving Prussian palaces in Germany and has 70 rooms and countless corridors, consisting of many different buildings. These include the Altes Schloss, which is the main building with the suites of Friedrich I and his wife, and the Neuer Flügel (New Wing), where King Friedrich I once lived. There are many ornate furnishings - in the west wing you will discover a collection of ancient artifacts and also some prehistoric items of interest. This wing houses the enormous Golden Gallery (Goldene Galerie) which is the palace's grand ballroom and is over 42 metres / 138 feet long. The attractive gardens are also worth seeing and are open daily from dawn until dusk. Hourly guided tours around the royal apartments are available.
Open hours: Tuesday to Friday 09:00 to 18:00, weekends 11:00 to 18:00
Admission: charge, free every first Sunday of the month

Built with marble that was taken from Hitler's Chancellory, the memorial in the Tiergarten is situated nearby the Brandenburg Gate. Either side are the first two tanks that entered the city in 1945. In Treptower Park there is a large war memorial and the centrepiece is a tall statue of a soldier holding a sword in one hand, a child in the other, and perhaps most poignantly, standing on a swastika, crushing it with his foot. This memorial is dedicated to the many Soviet soldiers who died in the Battle of Berlin. There are over 5,000 people buried here in this mass grave.

Address: Friedrichstrasse 44, Berlin, Germany
With only a few small sections of the Berlin Wall remaining, it is hard to imagine its existence today, and all the trouble and deaths that it caused. Checkpoint Charlie was the third Allied checkpoint tower and is named after the third letter of the military alphabet, i.e. alpha, bravo, charlie. After the border reopened in 1989, the tower was carried away by a crane and was soon replaced by a replica guardhouse. Nearby there is a famous sign that is written in English, Russian, French and German and warns - 'You are now leaving the American sector'. Checkpoint Charlie still remains as one of the most famous parts of the Berlin Wall and has featured in many blockbuster films. There is a guard tower and also a red line that clearly marks the former divide of east from west.

Address: Niederkirchner Strasse 3, Berlin, Germany
This open-air landmark museum is a haunting reminder of the city's Nazi past and once functioned as the HQ of both the Schutzstaffel (SS) and the Gestapo. During the Second World War, the buildings suffered considerable bombing damage, although the basement remains relatively untouched. Visitors will be able to check out the chamber of horror, where prisoners were once tortured. There is also an interesting exhibition centre, where displays tell the story of the Nazi rule.