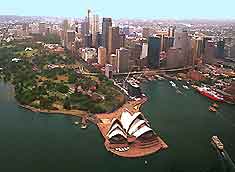 The world-famous Sydney Opera House was formally opened in 1973 by Queen Elizabeth II. This dramatic building, with its distinctive sail-like features, was designed by Danish architect Joern Utzon as a result of an international competition. The judges chose Urzon's design above all others because it was by far the most unusual and inspirational project, but throughout the construction numerous problems were encountered. Due to the constant pressure of arguments and construction delays, Utzon eventually resigned. These immense difficulties culminated in the Sydney Opera House taking ten years longer to build than was first estimated and this escalated the final cost of this dazzling building, with most of the extra money being raised from Sydney lotteries. 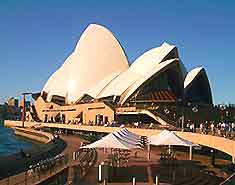 Partly inspired by the sails of the yachts on Sydney's scenic harbour, the Sydney Opera House is now the most recognized symbol of Sydney and Australia, and is one of the most beautiful buildings in the world. The Sydney Opera House is an enormous complex and consists of five different performing venues and includes the Opera Theatre, a concert hall, cinema, bars and restaurants. The building hosts a wide range of entertainment and activities in Sydney, including films, opera, drama, music and dancing.

Located on Bennelong Point on the south side of the harbour, Sydney Opera House is conveniently situated with Circle Quay and Harbour Bridge on one side and the Royal Botanic Gardens and Lady MacQuaries Chair on the other. At night the Opera House is floodlit, providing breathtaking views against Sydney's magnificent harbour. 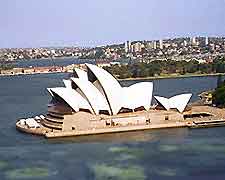 The Impressive Sydney Opera House is open to the public and one-hour guided tours take place every half-hour. There are front house tours daily and back stage tours are available occasionally. Tours of the Sydney Opera House can be postponed at short notice if performances or rehearsals are taking place.