Sydney is divided up into various neighbourhoods, locations, districts and interesting areas, full of many top tourist attractions, major Aussie landmarks and historic buildings, restaurants and viewpoints. The main neighbourhoods in Sydney include the following areas. 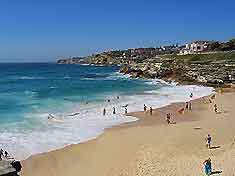 Sydney's breathtaking, golden Eastern beaches stretch from the lively Bondi Beach to more relaxed Coogee Beach and have become one of Sydney's most popular attractions. Close to Sydney city centre, attractions at Sydney's Eastern Beaches include swimming, surfing, walking and alfresco dining, often with exceptional views of the coastline. To the south of Sydney's Bondi Beach you will find Tamarama Beach, which is home to a charming cove and is popular with locals in Sydney. 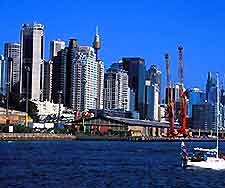 Full of an interesting mixture of striking, modern buildings with a more traditional market centre, Sydney's Darling Harbour and Chinatown is a lively and exciting area. Sydney Chinatown is often referred to as Sydney's Latin Quarter, as this is where you will find a large concentration of Spanish restaurants and an impressive nightlife. The Chinatown area of Sydney includes Dixon St. Mall, Haymarket and the restored Paddy's Markets in Market City.

Located slightly to the north-west you will find Sydney's Darling Harbour, a huge, waterfront leisure park on the western edge of Sydney. Previously a thriving dockland area with factories, warehouses and shipyards along Sydney's Cockle Bay, Darling Harbour was reinvented in 1998, as part of the Australia Bicentennial celebrations. 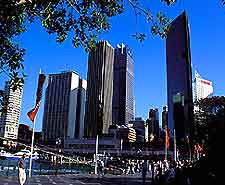 Sydney's City Centre, The Rocks and Circular Quay form the heart of Sydney city and the first non-Aboriginal settlement in Sydney was made in this area, to the west of Sydney Cove. The Rocks were once the centre of the colony's maritime and business enterprises, with large warehouses and factories. Wealthy businessmen soon built large houses in the Fort Street area of the Rocks and the area gradually fell into decline as the modern shipping facilities moved away from Sydney's Circular Quay. Today, The Rocks and Circular Quay have been completely restored and renovated, becoming a popular tourist precinct, with many historic cobbled streets, colonial buildings, converted warehouses and street cafés. Sydney's Circular Quay area is now the main departure point for all ferries, the starting point of many of Sydney's bus routes and home to a large train station on the City Circle.

Darlinghurst is one of Sydney's most fashionable and trendy districts, popular with young people. With exceptional restaurants, shopping facilities, bars and nightclubs, Sydney's Darlinghurst is situated between Oxford Street, with an enormous range of entertainment venues, and William Street, with cocktail bars and strip joints. Other important areas in Darlinghurst include Stanley Street - often referred to as Sydney's Little Italy, Kings Cross - with a mixture of designer fashion boutiques, luxury hotels and youth hostels, and Woolloomooloo - one of Sydney's oldest districts. Nearby Potts Points is a more upmarket area, with many stylish Victorian terraces and Art Deco buildings.

The Inner West district of Sydney was originally a working-class area and has evolved into one of Sydney's most pleasant areas, with prime real estate and a number of historic buildings. The Balmain area of Sydney's Inner West includes Darling Street, which runs along the entire length of the peninsula and is lined with public houses, restaurants, fashion outlets, bakeries, antique stores and many interesting, small gift shops. The strongly Italian suburb of Leichhardt is nearby, with a number of world-class, authentic Italian restaurants and eateries. Glebe, to the south-west of Sydney city centre, is located close to the University of Sydney and has a relaxed atmosphere, with many local shops. Other attractions at Glebe, in the Inner West area of Sydney, include Glebe Point, with many reasonably priced restaurants, shops and hotels. To the south of Sydney University lies Newtown, home to some scenic harbours and a lively nightlife. Newtown's King Street is full of vintage clothes shops, bookstores and local Sydney cafés.

Sydney's Surry Hills region is situated to the south of Darlinghurst, between the east side of Central Station and South Dowling Street. Once a heavily working-class district, Surry Hills is now a thriving, multicultural area, with many interesting local shops, boutiques, cafés and restaurants. East Sydney starts from Sydney's edge and runs next to Kings Cross and Darlinghurst, with its main strip being Liverpool Street, which is dissected by Bourke Street and Forbes Street.

The Paddington area of Sydney runs along Sydney's Oxford Street, with a number of busy streets running off it in different directions. Located just 4 km / 2.5 miles from Sydney city centre, Paddington is an attractive residential area, with tree-lined avenues, Victorian buildings, a Saturday market bazaar and expensive, upmarket terraces. Nearby, Tony Queen Street is the backbone of Sydney's Woollahra neighbourhood, running to the east of Oxford Street, close to Sydney Centennial Park. With a number of cafés, exclusive restaurants, popular boutiques, antique stores and local gift shops, the Woollahra area of Sydney is the perfect place to combine walking, sightseeing and shopping.

Sydney's Eastern Suburbs incorporate the harbourside areas of Kings Cross, Elizabeth Bay, Fitzroy Gardens, Macleay Street, Boomerang, Darling Point, Edge Cliff, Point Piper, Billyard Avenue and the exclusive Vaucluse suburb. Here you will find some of Sydney's most stunning Art Deco apartments and many other luxurious homes and mansions of wealthy residents. Rose Bay is one of the most popular areas in Sydney's Eastern Suburbs and features a pair of long, golden beaches, forming the southern side of the entrance to Sydney Harbour. New South Head Road is the main street in the Eastern Suburbs, which runs all the way to the scenic South Head area.

This area of Sydney is unofficially known as the Sydney North Shore and encompasses the suburbs that are located to the north of Sydney Harbour. With a number of attractive beaches, bays, charming shopping districts and restaurants, Military Road is the main area in Sydney's North Shore, branching off towards the Warringah Freeway close to North Sydney, and the busy pacific Highway. 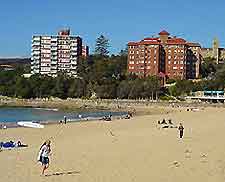 Manly is one of the most attractive district on the North Shore of Sydney and is located on a narrow peninsula, with vast cliffs in the North Head area. With many top tourist attractions, a friendly community, affordable hotels and The Corso - a vast pedestrian mall, one of the best ways to reach Manly is by the scenic ferry. Manly has both harbour and ocean beaches, which are always sunny and very popular, making this a lively holiday resort area of Sydney.

Greater Sydney stretches for more than 50 km / 31 miles to the west of Sydney, right up to the foot of the Blue Mountains in the Penrith area. With a number of housing developments, incorporating towns such as Liverpool and Campbelltown, Greater Sydney also features many ocean-front suburbs, which run along the coast from Manly to the picturesque area of Palm Beach, which fronts the Pacific Ocean and backs onto Pittwater. Known as the Northern Beaches, this area of Sydney includes Bilgola, Collaroy, Curl Curl, Dee Why, Freshwater Narrabeen and Whale Beach. Greater Sydney is also home to Parramatta, the geographical heart of the area, where there are a large concentration of historic buildings and landmarks.