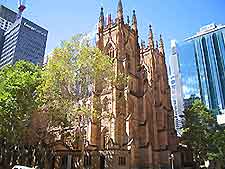 A city boasting some enchanting churches and religious buildings, Sydney comes with no less than two imposing cathedrals. St. Andrew's Cathedral serves as the seat of the city's Anglican Archbishop and holds parish services every single day, along with regular choir and organ recitals.

Known for its splendid historic Gothic facade and almost medieval appearance, St. Andrew's does rather contrast with the surrounding sleek modern buildings and provides real character to George Street, standing amidst all of the rather plain high-rise office blocks.

Slightly younger is the Metropolitan Cathedral of St. Mary, Sydney's principal church of the Roman Catholic Archdiocese. St. Mary's is actually the biggest church in the whole of Australia and dominates College Street with its magnificent architecture, being situated alongside the city's Fragrance Garden and fronted by a line of mature trees. The cathedral's twin spires remain a prominent sight, despite being enclosed by the many tall buildings making up the Central Business District.

Address: Corner of Bathurst Street and George Street, Sydney, New South Wales (NSW), 2000, Australia
Tel: +61 (0)2 9265 1661
St. Andrew's is the oldest cathedral in the whole of Australia and was founded in 1819. Located near the Town Hall, directly opposite the Adyar Bookshop and the Bonta Vita restaurant, this cathedral was actually inspired by the grand York Minster in England. Highlights include breathtaking architecture, stained-glass windows at their finest, detailed carvings, 'Young Music' concerts every Tuesday lunchtime, organ recitals on Fridays and many religious-themed events.
Open hours: Monday to Friday - 08:00 to 17:30; Saturday - 09:00 to 16:00; Sunday - 08:00 to 20:00 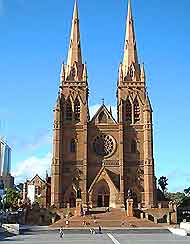 Address: St. Mary's Road / College Street, Sydney, New South Wales (NSW), 2000, Australia
Tel: +61 (0)2 9220 0400
Visited by Pope Benedict XVI in 2008, St. Mary's Cathedral is situated alongside College Street, on the north-eastern corner of Hyde Park and close to the Archibald Fountain. With Gothic-style architecture, free guided tours and many historic features, St. Mary's was built in the late 19th century and took around 14 years to complete. The twin spires were actually added between 1998 and 2000, greatly improving the overall appearance. With a cavernous interior and many impressive attractions, this is actually one of the largest cathedrals in the world.
Open hours: Sunday to Friday - 06:30 to 18:30, Saturday - 08:00 to 18:30

Address: 166 Castlereagh Street, Sydney, New South Wales (NSW), 2000, Australia
Tel: +61 (0)2 9267 2477
Sydney's Great Synagogue dates from 1878 and is home to the longest-running congregation in the entire city. Featuring an elaborate ceiling with gold-leaf stars, French Gothic-style wrought-iron gates and many stunning period details, other attractions at the synagogue include a museum and seasonal exhibitions. The Great Synagogue can be found right next to Hyde Park, being just a short walk away from Sandringham Gardens and the Anzar War Memorial.
Open hours: hours vary

Address: Clarence Street, Sydney, New South Wales (NSW), Sydney
Tel: +61 (0)2 9247 1071
Founded in 1856, St. Philip's was built by architect Edmund Blacket and features Victorian-style architecture. Surrounded by many modern skyscrapers and buildings, this is a particularly peaceful church and was the first in the city to be lit by gas.
Open hours: daily - 09:00 to 17:00

Other churches and religious buildings in and around central Sydney include: