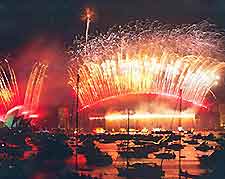 Sydney is very much a city of culture, with many regular exciting festivals and things to do all through the year. Countless sold-out concerts are regularly held at the Opera House, being performed by the Sydney Symphony Orchestra and drawing crowds of some 2,600.

The city has also become known for its alternative rock scene and related live music events. Various music festivals have been staged here over the years, including the Big Day Out, which began its life in Sydney in 1992, before travelling all around Australia and New Zealand over subsequent years.

Of course, the aptly named Sydney Festival warrants a strong mention and lasts for some three weeks each January, being first held in 1977. This is now a huge arts fest with more than 100 different events taking place, drawing in excess of half a million people. Also of note are the spectacular Gay and Lesbian Mardi Gras celebrations each February, based on Oxford Street, as well as the lively St. Patrick's Day festivities in March. Later in the year, look out for 'Sculpture by the Sea', held at Bondi Beach.