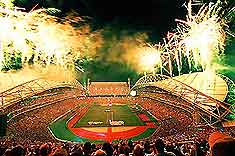 The Olympics Games started over two thousand years ago in ancient Greece where the grand event was held at Olympia. The modern Olympic Games has evolved from this small beginning into a spectacular worldwide sporting event, held every four years and hosted by a particular country. In October 2000 Sydney, Australia was chosen by the International Olympic Committee to host both the Olympic and Paralympic Games.

The main Olympic site for the Sydney Olympic Games 2000 was held at Homebush Bay and this is now Sydney's main sports and recreational area. The wealth of sports facilities at Sydney's Olympic Park includes the Millennium Park, The Sydney Showground, the Sydney International Aquatic Centre and the main Olympic Station. Numerous other sports facilities were provided nearby such as golf, hockey, archery, baseball, tennis and badminton. The Sydney Olympic Games were an enormous success with an array of world records being broken during course of the games. 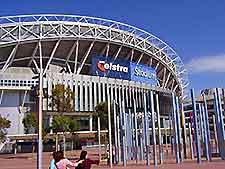 Address: Olympic Boulevard, Homebush Bay, Sydney, New South Wales (NSW), 2140, Australia
The spacious Sydney Olympic Stadium was designed to hold over 110,000 visitors and was the central point for the athletic events. Featuring many memorable Olympic moments, the Sydney Olympic Stadium hosted the opening ceremony, the final lap of the marathon and of course the closing extravaganza, which featured an impressive performance by Australia's own Kylie Monogue. 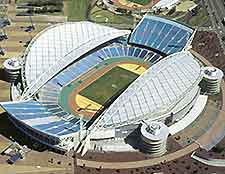 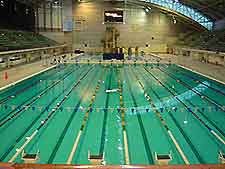