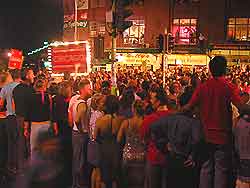 The exciting city of Sydney is Australia's leading LGBT city and has an active gay community, which is generally situated in and around the easterly suburbs and mainly concentrated within the Taylor Square area of Oxford Street. Notable gay beaches include Lady Bay and Tamarama, the latter of which is also known as Glamarama and has lost much of its popularity in recent years, with men now tending to head to North Bondi as well.

There are certainly plenty of welcoming gay bars and clubs dotted around Sydney, with one of the best being found at the award-winning Midnight Shift Hotel on Oxford Street, within the neighborhood of Darlinghurst. The Midnight Shift is both a gay bar and a nightclub, and interestingly is actually the oldest venue of its kind in the whole of Sydney, being opened in the early years of the 1980s. Live entertainment is on offer most nights, including some rather beautiful drag queens and fun cabaret acts, where audience participation is often called upon and becomes an integral part of the show.

There are many further gay friendly hotels, bars and nightclubs on Oxford Street, such as the Beauchamp, the Colombian, the Oxford Hotel and its Underground Bar, the Phoenix Bar, the Polo Lounge, the Slide Lounge, the Stonewall Hotel, and the Up Dayclub at the Phoenix Underground. The LGBT scene is also beginning to make itself known at venues within the districts of Camperdown (Manning Road), Erskineville (Erskineville Road), Newtown (King Street) and Surry Hills (Bourke Street).

The highlight of the gay and lesbian year in Australia is the Sydney Gay and Lesbian Mardi Gras Parade along Oxford Street and Flinders Street, in Darlinghurst, which has its origins at the end of the 1970s. This annual pride parade tends to last an entire month and festivities generally begin in late February / early March, drawing crowds in the region of 300,000 attendees or more. With such an influx of party goers, hotels in Sydney quickly become fully booked.

The Sydney Mardi Gras includes a sports carnival, theatre performances, firework displays, light shows, art and film exhibitions, magnificent carnival floats, amazing costumes, colourful parades, market stalls and lots of opportunities to party. There is no denying that these pride celebrations make for a truly spectacular event and although nudity is forbidden, onlookers must be prepared for some rather unusual sights and lots of bare flesh.

Particularly notable events include the harbour party, the drag races at Bondi Beach, and of course, the procession itself, which reliably boasts over 9,000 entrants. The parade usually features some big-name celebrities and in the past, these have included Alexis Jordan, Boy George, Cyndi Lauper, George Michael, Heather Small, Jimmy Somerville, Kylie Minogue and RuPaul, amongst many others.