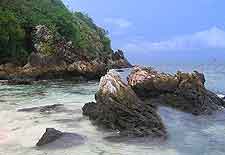 The tropical holiday island of Phuket is nestled in the Andaman Sea, off the western coast of Thailand, where it is connected to the mainland by two road bridges.

A popular sun, sea and sand holiday destination for decades, the island has a fascinating history due to its setting on a major maritime trade route between both the countries of China and India. Prior to the tourism boom, rubber plantations and tin mines drove the Phuket economy.

Phuket, Thailand's biggest island, has a known history dating back to around 1025 AD, supported by excavations suggesting its inclusion in the Shivite Empire, which ruled the Malay Peninsula. The island was known to British, Dutch and also the French traders as early as the 16th century, with its rich veins of tin becoming the subject of fierce competition between the three nations. A Dutch trading post was established here in 1626, with Phuket's western and southern areas the hub of the tin trade and given over to foreign control.

By the late 17th century, the French controlled most of the Phuket tin trade. To strengthen the French position and reduce British and Dutch influence, Siamese ruler Narai appointed medical missionary Rene Charbonneau to the position of island governor in the early 1680s. Charbonneau was replaced in 1685 when King Somdet Phra Narai gave the French ambassador Alexandre, Chevalier de Chaumont the complete French monopoly of tin. However, three years later, the French were forced off the island following the Siamese Revolution that overthrew pro-foreign Narai, in spite of several military deployments by the forces of Marshal Desfarges. 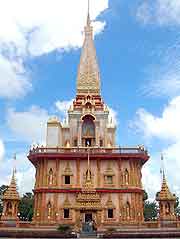 The sacking of the great Siamese city of Ayutthaya by the Burmese in 1767 led to the rise of King Taksin (Somdet Phra Chao Taksin Maharat) the following year. He finally drove out the conquerors after a long struggle and successfully reunified Siam.

In 1785, Phuket bore the brunt of a Burmese attempt to reconquer the south of the country. This was eventually prevented by the actions of two amazing women, Thao Thepkasattri (Kunying Jan) and her sister Thao Srisoonthorn (Mook). Together, they assembled Phuket locals into a fighting force and sent the Burmese packing after a month's siege. Feted as heroines, the pair received honorary titles from Siam's king, Rama I. A monument to the brave sisters and their part in Phuket's history can be seen opposite the Thalang National Museum, as you travel from the airport.

Expansion in the 19th Century

The tin trade roared back onto the agenda in the 19th century during the reign of King Chulalongkorn, with the tin-bearing regions on the island in full production and administered locally. Chinese migrant labourers arrived in droves, with Phuket's ethnic mix becoming predominately Chinese as a result, although the Muslim fishing and sea gypsy villages continued in their old ways.

The 20th Century and the Tsunami

In 1933, Phuket became a Thai province as part of the changes to a parliamentary system following the fall of the absolute monarchy. Sunseekers and backpackers discovered Phuket's deserted coves and beaches in the 1970s, with Club Med establishing itself at Kata Beach soon after the word got out.

Revenue from tourism soared as flights became more accessible and Western package tour companies joined in. Briefly, the dark days returned with the devastating 2004 tsunami, but the affected resorts were quickly rebuilt out of the rubble.