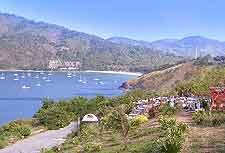 Phuket is a stunning island destination and full of coastal resorts and gorgeous stretches of soft, white sandy beaches. In general, the main beachfront destinations lie on the western coast, with the main island itself being split into a number of large districts, surrounded by around 30 smaller islands that are still considered to be part the Phuket province itself.

The island's capital, Phuket City, can be found close to the south-eastern coast and next to the bay, being recently elevated to city status in 2004. Many people visiting the island choose to stay in Phuket City and use this as a base for the main beaches and day trips. The island's main districts and resorts are explained below. 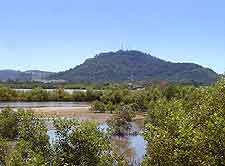 Phuket City has a population of just over 70,000 people and offers plenty of tourist appeal. The historic town centre has become known for its attractive Sino-Portuguese architecture and Chinese-style facades, which are particularly plentiful around the Chinatown district. Whether you visit the day market on Ranong Road, the oldest foreign bank in Thailand, some of the many Chinese temples, or simply take a stroll along the streets of Krabi, Phang-Nga, Rasada or Thalang, there is always plenty to do here. Many tourists head to Phuket Hill (Khao Rang), where the views across the city, the jungle and the sea and unbeatable. 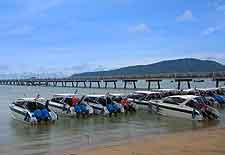 The Muang District tends to offer a good alternative to the westerly resorts and also Phuket City itself, which is part of this area. A noticeably cheaper selection of accommodation can be found to the south of Muang, around Chalong Bay, the biggest bay on the whole island. Whilst many of the main attractions lie within Phuket City or close by, such as both the zoo and the butterfly garden, much of the Muang District is worth visiting for its seafood restaurants alone. The far south, the Prom Thep Cape peninsula is an important natural landmark and boasts superb sunset views, while the nearby Siray Island is of particular interest, being home to the regions most significant Sea Gypsy village, Thailand's famous boat people. 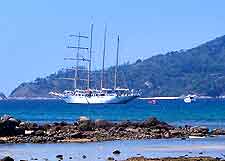 Home to the ever popular Patong Beach resort, Phuket's Kathu District can be found on the south-western side of the island. A tourist hotspot, visitors head to Patong for its lively nightlife, its beachfront hotels, its excellent shopping facilities and its variety of water sports. Highlights within this district include scuba diving, snorkelling, golf, bungee jumping and a number of additional sandy beaches, such as Kata Noi Beach, Kata Beach and Karon Beach, all of which lie to the south of Patong. Just 6 km / 4 miles north and next to the outstanding Phuket FantaSea, Kamala Beach is especially family orientated and is also near to the beaches of Leam Sing, Pansea and Surin. 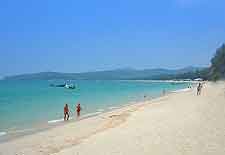 The northern side of Phuket Island is encompassed by the Thalang District, home to Phuket International Airport. Many appealing beaches stand on the western side of Thalang, such as Bang Tao Beach, Nai Thon Beach, Nai Yang Beach and Mai Kao Beach, while to the north, the causeways of both Sarazin Bridge and Thepkassattri Bridge connect the island with mainland Thailand. Thalang's main attractions include the Two Heroines Monument, the stunning golden Buddha within the Wat Phra Tong temple, and also the Sirinat National Park, which contains a breathtaking stretch of beach that extends for more than 10 km / 6 miles, and many lush mangrove forests.