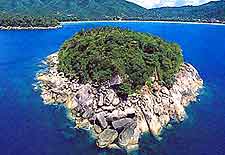 One of the most beautiful and popular resorts in the whole of Thailand, there is always something going on in Phuket, with plenty of festivals, seasonal events and things to do, suiting all visitors, regardless of ages. Highlights include the Phuket International Blues Festival and the national celebrations during the Chinese New Year, both of which take place during the month of February.

Many people staying in Phuket during the summer months will be able to enjoy the mouth-watering Seafood Festival, the cheering spectators watching the Phuket International Marathon, and also the increasingly popular Phuket Surfing Contest, held each year next to Kata Beach. For most, the main festivals in Phuket are the city's numerous sailing regattas and yachting events, with the King's Cup Regatta each December always being a crowd puller.