Getting Around, Phuket Travel, Transport and Car Rental 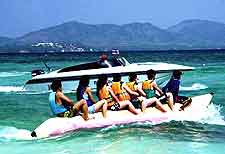 The transport options available around Phuket are good and the island itself is connected to mainland Thailand by a much-used 100-metre / 328-foot causeway, the Thepkassattri Bridge. The means that it is actually possible to drive to your resort, even though Phuket is classed as an island. Each day, literally thousands of people choose to fly into Phuket International Airport, while others travel here from nearby cities, such as Bangkok, via long-distance bus transport or part way by train.

Many of the ports around the island of Phuket are connected by ferry transport and other boats, which become more frequent during the peak season and are a scenic way to travel around the coast. However, the classic three-wheeler 'tuk tuks' are perhaps the ultimate transport option on Phuket and throughout Thailand, regularly weaving in and out of the traffic within Phuket City itself. 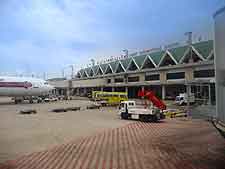 Address: 222 Moo 6, Mai Khoo, Talang, Phuket, 83110, Thailand
Tel: +66 076 327 2307
Phuket International Airport lies on the northern side of the island and is approximately 30 km / 19 miles from Phuket City itself, a 45-minute drive. The airport provides a particularly easy way to travel into the island and is currently used by just over eight million travellers annually. Flights regularly arriving at Phuket Airport from many international destinations, include Hong Kong, Kuala Lumpur, Singapore, Taipei and Tokyo, as well as domestic Thailand locations such as Bangkok and also Chiang Mai. Ground transport at the airport consists of mainly taxis, minibuses, hotel shuttles and limos. 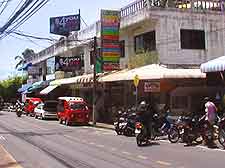 Various car rental travel agencies are located on the island, with four main companies at Phuket Airport. You will be able to hire cars, 4WDs, jeeps and also vans. Within Phuket City itself you will find a number of inexpensive car rental agencies located on Rasada Road. A fairly extensive well-signposted highway network links most resorts and beaches around the island, while it is also possible to drive to Bangkok in around nine hours. An International Driving Permit and passport will always be required when renting a car in Thailand. 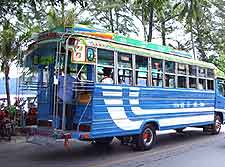 Bus transport and minivans provide a convenient way to travel around Phuket City and the many coastal locations around the island. The bus terminal within Phuket City lies on the eastern side of the centre and also features regular long-distance buses, providing transport to cities such as Bangkok (13 to 15 hours), Krabi (4 hours), Phang Nga (2.5 hours) and Tukua Pa (3 hours). Air-conditioned bus transport is always preferable, although usually slightly more expensive.

Those wishing to travel to Phuket by train transport will find that the nearest railway station is the Phun Phin station, which is close to Surat Thani. From here you will need to use minibuses to travel to your specific destination. First, second and third class seating is available on most trains.

Ferry travel is a relaxing way to reach the island and a number of ferries currently link Phuket with Krabi, Ko Phi Phi (Ton Sai Bay) and also the Yao islands. The main ferry terminal is located on the eastern side of Phuket City at Koh Siree. Large cruise ships also arrive here from international destinations.