A legendary tourist destination on the south-westerly side of Thailand, the island of Phuket (pronounced 'poo-get') is simply spectacular. To many, Phuket has all of the ingredients necessary to make a perfect holiday. Tourists visiting Phuket can expect soft, sandy beaches - a number of which stretch for literally miles, and warm, crystal clear waters, full of marine life and perfect for both scuba diving and snorkelling.

The coastline of Phuket is a true mixture of sandy bays, rocky outcrops, and dramatic limestone cliffs, with many of the main tourism resorts being clustered on the island's western coastline, such as Kamala Beach, Karon Beach and also Patong Beach. Those looking for something a little different to beaches will find that Phuket also offers lush areas of rain forest, large coconut plantations, rice paddies, elephant trekking, sailing, safaris, bamboo rafting and even bungee jumping, which is not for the faint hearted. 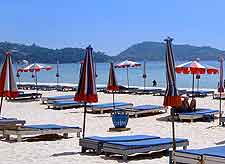 For the latest tourist information, the Tourism Authority of Thailand (TAT) has a good branch, which is located within the island's capital, Phuket City (previously Phuket Town).

Many of the city's best tourist attractions can be found within the historic town centre, and also in the colourful Chinatown area. You can expect to find a number of historic shrines and temples around the city, while for the best views, take a walk up the Khao Rang (Phuket Hill), which can be found to the north-west of the city centre. 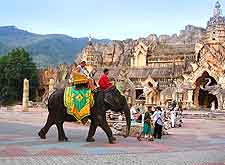 Tourists in Phuket will find plenty to keep them fully occupied during their stay on the island. Ranging from pleasure cruises and safari tours, to a large zoo, aquariums and a butterfly garden, Phuket's main tourist attractions are varied to say the least. Families will always enjoy the elephant shows and trekking, together with the vast theatre and restaurant at the FantaSea theme park. For adults, a trip to the Simon Cabaret is a fun way to spend an evening, where beautiful costumed Thai 'ladyboys' dance and perform in this elaborate show. More information about Phuket Tourist Attractions.

Amongst the most notable landmarks around Phuket are its many historic Buddhist temples. The most significant of these include the Wat Chalong, Wat Phra Nahng Sahng and also the
Wat Phra Tong (Pra Tong Temple), famous for its magnificent golden Buddha. The natural peninsula of Prom Thep Cape, on the southern end of Phuket, is home to an interesting shrine, and is perhaps best known for its stunning views and sunsets. Also notable are the Two Heroines Monument, the Chui Tui Shrine, and Khao Rang (Rang Hill), which overlooks Phuket City and is a great spot for holiday snaps. More information about Phuket Landmarks.

For something a little different to the beaches and water sports around Phuket, the island does contain a handful of noteworthy museums and good art galleries. With information about Thailand's semi-nomadic Sea Gypsies, the Thalang National Museum is a good place to spend some time. No other museum in the world has such an extensive collection of shells as the popular Phuket Sea Shell Museum, where you find enormous clam shells and golden pearls. Phuket City is home to perhaps the best selection of art galleries, which stand along Phang Nga Road, Thepkasattri Road and Yaowarat Road. More information about Phuket Museums and Phuket Art Galleries. 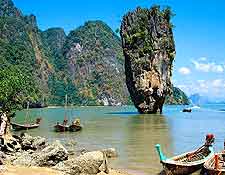 Boat trips and cruises are a great way to explore the many islands surrounding Phuket, many of which boast spectacular beaches and notable dive spots, such as both the Similan Islands National Marine Park and also the Surin Islands National Park. Believed to be amongst the world's most beautiful beaches and close to Phuket, Phra Nang Beach within the Krabi Province really does need to be seen to be believed, as does the island of Khao Tapu, which is located in Phang Nga Bay and also goes by the name of James Bond Island, after its iconic appearance in the Bond movie 'The Man with the Golden Gun'. More information about Phuket Attractions Nearby.