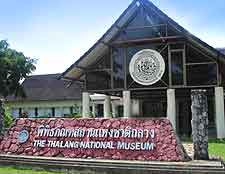 Phuket is home to a number of impressive cultural attractions and also a handful of particularly good museums. The popular Thalang National Museum stands out as being amongst the best and is close to the Two Heroine's Monument, south of Phuket Airport and close to the main highway.

A little more usual and celebrating the seaside theme, the Phuket Sea Shell Museum deserves some time and can be found close to the entrance of the Evason Phuket Resort and Six Senses Spa near Rawai Beach. This museum is hard to miss, since is features an enormous shell outside. Phuket's main museums are explained below.

Address: Pakhlok Road, Thalang, Phuket, 83000, Thailand, TH
Tel: +66 076 31 1025
Close to the eastern shoreline and Cape Yabu, Laem Hin Harbour and Sapam Bay, Thalang National Museum is dedicated to the history of Phuket and contains many important artefacts. Highlights include information about the Sea Gypsies, the island's rich Chinese heritage, tin mining, nearby Two Heroine's Monument and the related battle of Thalang. The monument itself stands close to the museum, on the main road, and is hard to miss. Within Phuket's Thalang National Museum you will also find displays about the Sukothai kingdom, Indian culture and also a huge statue of the famous Hindu god, Vishnu.
Open hours: daily - 08:30 to 16:00
Admission: charge, concessions for children

Address: 12 / 2 Moo 2, Viset Road, Rawai, Phuket, 83130, Thailand, TH
Tel: +66 076 38 1266
An unusual and surprisingly appealing museum, the Phuket Sea Shell Museum contains many of the most valuable sea shells in existence. The collection of sea shells is really like no other and in total, more than 2,000 shells are exhibited here, including giant clam shells, ancient fossilised shells, and a number of particularly rare and sought-after golden pearls, including the world's biggest.
Open hours: daily - 08:00 to 18:00
Admission: charge, concessions for children