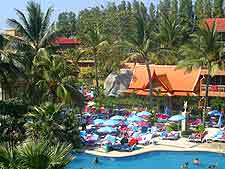 Offering much more than just traditional Thai curries and coconut-flavoured sauces, restaurants in Phuket pride themselves on using freshly caught seafood. Lobsters, crabs, squid, shrimps and all kinds of exotic fish abound within the waters surrounding the island of Phuket, with dining options often featuring locally grown fruit and vegetables, served with noodles or Thai rice.

Although Thai cuisine is widely available at restaurants all over Phuket, many of the resort hotels and restaurants also offer most Western-style and European dining at reasonable prices, along with bars, pubs and other independent eateries. 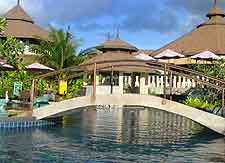 A great selection of restaurants await you in Phuket City and in general, dining within this part of the island tends to be considerably cheaper than at many of the touristy coastal resorts.

On the south-eastern side of central Phuket City, the bustling municipal market is a great place for those choosing to self-cater, and the night market also boasts an array of both Thai and Chinese cuisine. 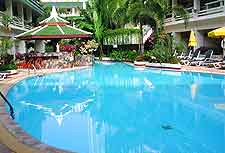 Close to the market and still within Phuket City, the popular Robinson Ocean Plaza is home to a number of popular restaurants within its food court. A number of vegetarian dining options are sited nearby, along the Th Ranong and close to the Jui Tui Chinese Temple.

Many of the most popular restaurants in Phuket are to be found close to the beaches and coastline, with the resort of Patong offering fine dining combined with outstanding views. Further eateries in Phuket come in good supply around the resorts of Chalong Bay - famed for its seafood and barbecues, Kata - where you will find upmarket restaurants and wine bars, Karon - with a cluster of dining venues lining much of the beach, and Kamala - with restaurants close to Laem Sing Beach, Pansea Beach and also Surin Beach.