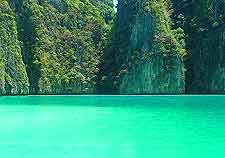 Phuket International ranks as the largest air facility in the region of Southern Thailand, but primarily serves the Phuket province. After Bangkok's Suvarnabhumi Airport, this is the largest passenger airport in Thailand, catering for more than eight million people per year. The number of passengers using this air facility has risen sharply in recent years, as a direct result of political problems in Bangkok.

There are two terminals - one is used for international flights, while the other is a domestic terminal. However, both terminals share the Arrivals and Departures halls. Currently, the terminals are undergoing major expansion and refurbishment, at the cost of almost $200 million. These upgrades are due to be completed in 2015 and could even see a new terminal and rail link to Krabi being built.

This island is very much a seasonal holiday destination, and as such, its airport handles most of its passenger population between October and May. Flights to Phuket originate from other cities in Thailand, like Bangkok and Chiang Mai, as well as international destinations such as Japan, Hong Kong, Singapore, Australia and Europe. Close to 60,000 flights arrive at and depart from the facility each year.

This airport is reachable by car from anywhere on the island. Take Highway 402 from either the northern or southern districts of the island. It is also possible to take Route 4031 off Highway 402 to the airport. From the Arrivals area, car hire is provided, being a great option to get around the island.

Taxis can be organised from the Arrivals area at Phuket International Airport. Always ask for the 'meter' to be switched on rather than trying to negotiate a fixed fare. Of note, taxis are owned and operated by the Phuket City Government.

The easiest and most economical transportation option based here is the Airport Bus Phuket. It leaves every 30 minutes and stops at various places across the island, including the Big C Supercentre and the multi-purpose Surakul Stadium (capacity of 15,000), both of which reside at at Wichit.