Home to approximately 30 different temples (wats) and historic monasteries, the island of Phuket is full of interest and notable landmarks. One that stands out from the crowd is Phuket's Wat Chalong, which is held in particularly high esteem with local Buddhist monks.

Address: Tambon Rawai, Phuket, 83130, Thailand, TH
Tel: +66 076 21 1036
Literally translated as 'God's Cape', the Prom Thep Cape is one of the islands most notable natural landmarks and lies to the far south, around 2 km / 1.5 miles from Rawai Beach. With high cliffs and uninterrupted views, the Prom Thep Cape is most famous for its dramatic sunsets, which regularly attract crowds. Close to the cape's peak you will find a small and interesting shrine, which features a number of wooden elephants.
Open hours: daily - 24 hours
Admission: free 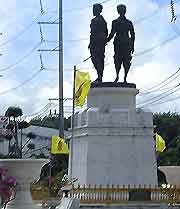 Address: Tha Rua Square, Amphoe Thalang, Thalang Town, Phuket, 83000, Thailand, TH
Standing proudly and the centrepiece to one of the island's largest roundabouts, the Two Heroines Monument is a particularly significant landmark. The monument remembers the lives of two sisters, who played an important part in the 18th-century Burmese War. Nearby, the Thalang National Museum on Pakhlok Road offers an insight into the monuments past and the lives of these two women.
Open hours: daily - 08:30 to 16:00
Admission: charge, concessions for children

Address: Thep Krasatri Road, Thalang Town, Phuket, 83110, Thailand, TH
Tel: +66 02 694 1222
Famous for its three striking Buddha images, which are made completely from local tin, the Wat Phra Nahng Sahng is close to the Wat Phra Tong. The temple itself stands on the side of a historic battle, which took place more than 200 years ago.
Open hours: daily - 24 hours
Admission: free 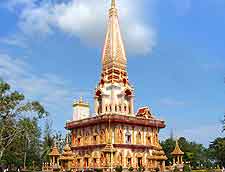 Address: Chalong, Phuket, 83130, Thailand, TH
Tel: +66 076 21 1036
Located within the southerly suburbs of Phuket City, the Wat Chalong temple lies off the Vichit Songkram Road. This magnificent temple is one of the most famous landmarks in the area and is always heaving with people during Thailand's many Buddhist holy days.
Open hours: daily - 24 hours
Admission: free

Address: Thiang Town, Phuket, 83000, Thailand, TH
Tel: +66 02 694 1222
The Wat Phra Tong temple can be found within the suburbs of Thalang and is best known for its stunning golden Buddha, which often features in local legends and tales. During the Chinese New Year, many of the island's Chinese Thais come here to pray. Whilst the temple is away from Phuket's main beaches, it is worth searching out if you have the time.
Open hours: daily - 24 hours
Admission: free

Address: Phuket City, Phuket, 83000, Thailand, TH
The Khao Rang overlooks much of the Phuket City and it is worth visiting this local landmark for the views alone. With endless photo opportunities and plenty of nearby eateries, this is a great spot for a drive and an impromptu picnic, with the city's glistening lights being particularly romantic at night.
Open hours: daily - 24 hours
Admission: free