Getting Around, Philadelphia Travel, Transport and Car Rental 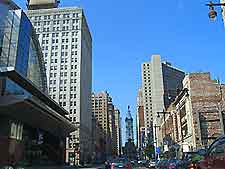 Philadelphia's excellent location between Washington D.C. and New York City provides it with very good road connections and travel options from all directions, as well as extensive rail transport connections from major cities as far away as San Francisco.

Located just southwest of the city alongside I-95, Philadelphia International Airport (PHL) is only 15 minutes by car from Center City. The airport features seven terminals and excellent passenger facilities, including good shopping and dining services and plenty of money changers and ATM machines.


Philadelphia International Airport receives direct flights from Europe and Canada, as well as from numerous cities around the US. SEPTA trains travel into central Philadelphia every 30 minutes and there are plenty of shuttle buses, limousines and taxis waiting to take you to your hotel. For further information, please refer to the Philadelphia Airport page.

Philadelphia Northeast Airport (PNE) lies about 10 miles / 16 km northeast of Philadelphia and receives regular domestic traffic. Travel into Philadelphia city center from the airport by road is straightforward, with highways 1 and 611 taking you to Center City, while the SEPTA Blue Line trains travel to Frankford Terminal, from where bus number 20 runs to Grant-Academy Shopping Center in the city. 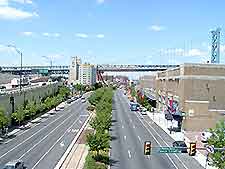 You will find all major car rental companies represented at Philadelphia's airports and in the city. The quickest route into Philadelphia is via highway 291, which runs right through the airport area and onto 611 to Center City. Major interstates, freeways and turnpikes travel into and around Philadelphia from Washington DC, New York City and surrounding areas. The I-95 travels from the north and south and the Pennsylvania Turnpike (I-76) runs through the northern reaches of Philadelphia from the east, connecting with the New Jersey Turnpike.

Greyhound Lines is America's most extensive interstate bus travel service, offering cheap travel options for those coming to Philadelphia from other parts of the country. Well worn routes to Philadelphia include frequent connections from New York City, Washington DC, Miami and San Francisco.

Philadelphia is easily accessed by train and the city lies on Amtrak's Northeast Corridor route, which ultimately runs between Boston, Massachusetts to Richmond, Virginia. Trains regularly arrive in Philadelphia from Chicago, stopping at Pittsburgh, Harrisburg and Lancaster in Amish Country along the way. Rail routes also travel to and from Florida, and travel between Atlantic City and Philadelphia aboard the NJ Transit. 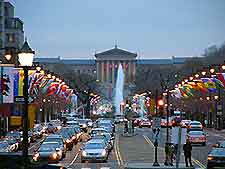 There are literally dozens of taxi and limo companies in Philadelphia, operating from the airport into the city. Taxis can also be ordered by telephone or by hailing them from the sidewalk around Philadelphia.

There are no tram services in Philadelphia; however, you can tour the city by the Victorian Trolley, which travels to most of Philadelphia's major sights with a commentary provided along the way.